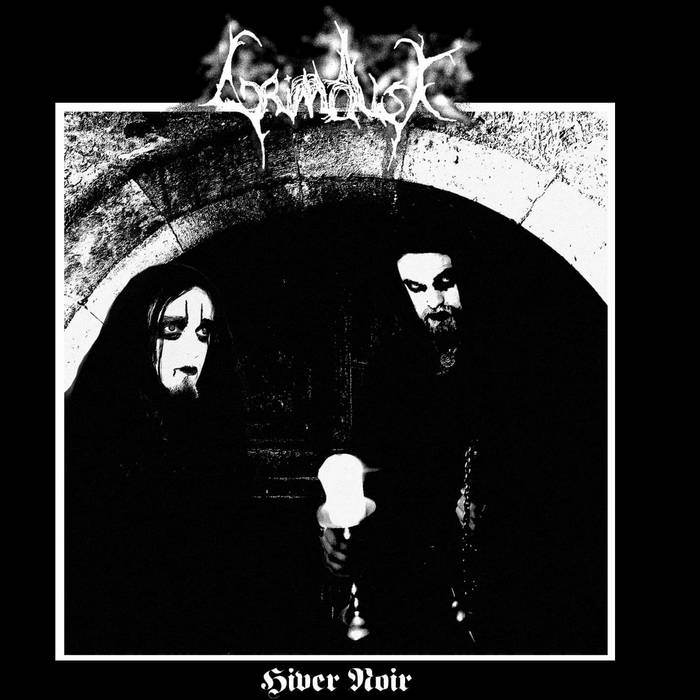 Out of the wild and dark French forests comes this Black Metal duo that goes under the name of Grimdusk. They are a part of a local Black Metal circle that call themselves ‘La Horde De La Forêt Noire’, which translates to ‘The Horde Of The Black Forest’ and comprises of bands like Windhelm, Narbarion and Kaldt Helvete. Last year the band digitally released their debut album, ‘Mémoires De La Nuit’ (‘Memories Of The Night’) and this year sees the band return with this new EP.

This EP, ‘Hiver Noir’ (‘Black Winter’), brings two cold but well-executed Black Metal tracks that gets escorted by an intro, interlude and outro. The intro, with what almost seem to be jungle sounds, feels a bit strange and especially since it then culminates in a Black Metal song that is quite similar to the French scene and second or third-generation Burzum-like bands. While mentioning the French scene, a comparison with the infamous Les Légions Noires can certainly be drawn, especially the rough and distorted vocals (with French lyrics) shows resemblances with (later) Mütiilation. The interlude is a calm piece of guitar strumming, which as it goes on even has a slightly Celtic slant, reminding me of the many French and British Celtic Folk bands of the late 60’s and early 70’s. Then we are again treated to unadulterated Black Metal. Again a lingering riff plays the leading role but the here and there odd-sounding swinging drums seem a bit out of place here, but after a few listens, this creative twist falls right into place. After this more than decent track, the odd and cheap-sounding Casio-keyboard outro is quite a bit of an anti-climax.

It might not be the most earth shattering Black Metal ever, but it is very enjoyable nonetheless. In any case, it stimulates the imagination and it arouses the interest in future work and the other bands from the La Horde De La Forêt Noire scene. It is only to be hoped that, with the current afairs in the world, this musical ‘Black Winter’ is only a great piece of Black Metal and not a daunting prophecy.