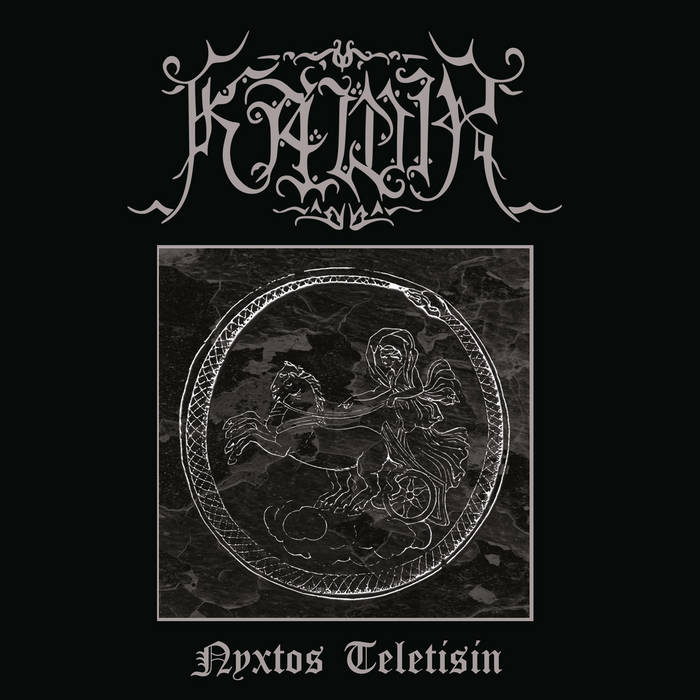 When talking about Greek Black Metal, the conversations will most likely be first about Rotting Christ, Varathron, Septicflesh, Thou Art Lord and Necromantia, only then about the many other cool bands that helped shape the soul of Greek Black Metal. Besides the aforementioned and most obvious bands there is also a lot to enjoy for the enthusiast, bands like Zemial, Horrified, Disharmony and Deviser offering at least an equally adventurous and colourful experience. Into the latter category also fits the commonly acclaimed Kawir. Although the band is widely appreciated, Kawir has never really been able to benefit from the commercial success of bands like Rotting Christ or Septicflesh.

However, that has never stopped the band from releasing one fantastic album after another. Their last couple of albums saw the light of day through Germany’s Iron Bonehead Productions, but since their formation in 1993, the band has released all kinds of (split) EP’s through various (often small) labels. And although all these songs have been compiled before, Poland’s Pagan Records now brings them together again on this compilation album. The tracklist of this compilation is almost identical to that of the first CD of the 2014 collector ‘Νυχτός τελετήσιν: 20 Years of Recordings’ released by Those Opposed Records. However, that collector also had a 2-track promo CD from 2007 and an alternative version of ‘Sword Of Dardanus’ – and a complete second disc full of a complete rehearsal set and some new songs. In addition, most of the songs on this Pagn Records compilation also appeared on the last record of the 6-LP boxset from 2016, also via Those Opposed Records.

Again, the tracks are in chronological order and give a good overview of the Greek band’s rich oeuvre. Going through all the tracks again like this, a few things stand out. First of all, that the band delivers high quality from the very beginning and has immediately embraced the distinctive Greek sound. But also that the recording and sound quality has improved over the years, which of course makes sense, but that both the rawer sound and the songs that come out a bit better production-wise both so obviously have their charms. Last and actually the most obvious is that Kawir is inextricably intertwined with the Greek Black Metal sound and is a heavily under-recognised band that really isn’t inferior to the best bands from the local scene. In fact, Kawir contributed quite a lot to the colourful Mediterranean sound and atmosphere that the scene is known for – its epic grandeur seems to naturally and superbly flow into the furious Black Metal riffs and sharp and raspy vocals. ‘Nyxtos Teletisin’ is basically a showcase in Greek Black Metal, a clinic, if you will, showing all the beauty and intricacies of the genre.

Anyone who does not yet have the CD version of the Those Opposed Records compilation or found the 6-LP box too expensive to purchase, now has another chance to get their hands on this great piece of Greek Black Metal history. Pagan Records is making these songs available on both CD and vinyl formats. So, don’t hesitate and support Kawir!