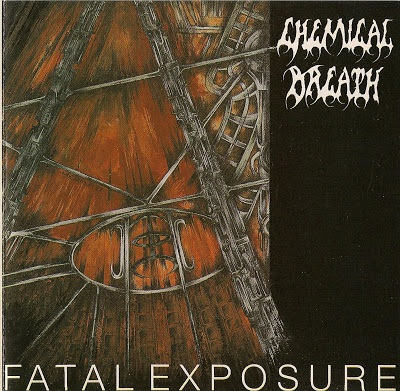 A band which was highly esteemed in the underground in the early 1990’s was Belgian Chemical Breath. And damn rightfully so! They played death metal in the vein of the well-known Florida death metal scene. The musicians were well-skilled and knew how to add a lot of technical finesse in their music without losing the listener’s attention. Not really surprising that Chemical Breath were frequently compared to Death.

Opening track “The advantage of disbelief” not only contains some killer fast technical guitar picking but also an atmospherical breakdown in the middle of the song with keyboards and some female backing vocals without sounding cheesy!Vocalist/guitarist Alain Chernouh has a very cool screamy grunt. Shit man, all 9 songs are absolutely killer! I just realize I should play this album a lot more often. It’s quite amazing how fresh this band still sounds considering the fact this CD was released 10 years ago! Check out those guitar solos, not just some fast shredding but rather thoughtful picking of notes.

Hell, and what about those guitar harmonies? Yup, this shit is still just as amazing as it was back in the day! They also released a 2nd CD called “Values” on which Alain used a more thrashy growl like Phil Anselmo. Unfortunately, I never bought me a copy of this album and I regret it to this day…Damn great band! (Saldiac)