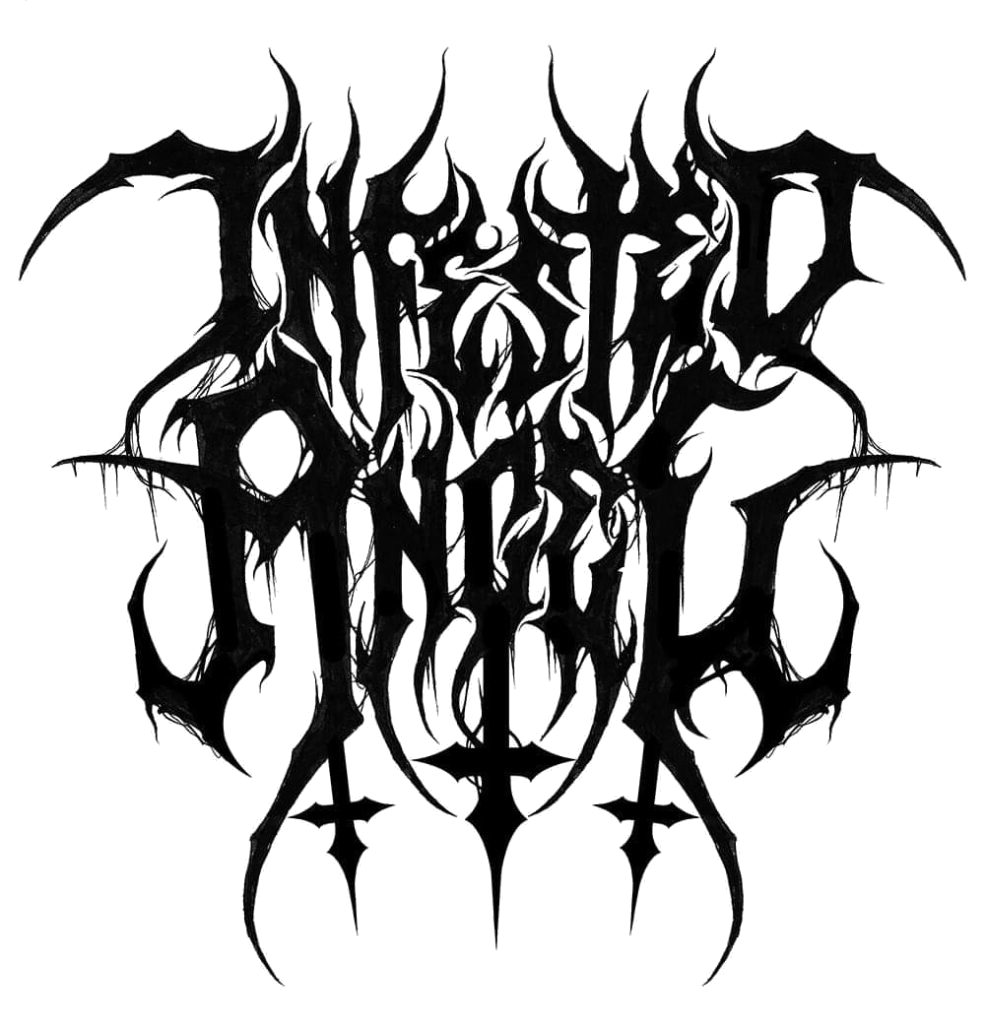 “Infested Angel could easily be the UK’s next big thing when it comes to Death Metal. Do not take your eyes and ears of these lads“. Those are my words when reviewing UK Death Metal band Infested Angel’s latest EP, ‘Submit to Death’. Recently, I caught up with the band to discuss their two EP’s to date, critics and more.
(Luke Hayhurst)

Greetings to the lads from Infested Angel. Thanks for taking some time out to answer my questions. What’s happening in your world at present?
Greetings! Thank you for sending your questions, it’s a pleasure to be speaking to you. Right now the band is about to hit a run of gigs going into Autumn. This will take in a slam festival (UK Slam Fest) and a crust punk sort of festival (Deviated Instinct) in Birmingham. So we’ll be in front of varied audiences and will share the stage with some legendary bands. We’re very grateful for all opportunities coming our way and can’t wait to batter audiences once again.

Perhaps the biggest news is that we’ve just appointed a new bassist who is busying himself applying his own flavour to our mournful blasting filth. We can’t wait to hit the stage with him in Worcester on Aug 20th!You are a Death Metal band that shies away from the gore/horror film elements so prevalent in Death Metal, and instead focus more on more human issues such as mental illness, as well as the more Black Metal type of subjects such as Hell and Satan. Can you give us a glimpse into the thought processes that go into Infested Angel lyrics?
I think a lot of what we write lyrically and musically is emotionally honest, and so that’s why a lot of our lyrics deal with the human issues you mention. A lot of this is embedded into metaphor concerning eternal torment, hell and envelopment into evil. I’d hope that our music helps people that deal with similar emotions to what we have been through to somehow feel better. It certainly feels good to us. I feel like I’m doing my best musically when I’m telling the truth…there’s no posing here.Your debut EP, entitled ‘Nourish Me, Satan’ has a cavernous, old school Death Metal sound. Where was the EP recorded and how happy are you with the finished product?
The EP was recorded at Prism Studios in Stoke by Sean Lowe. We’re happy with the sound of it for sure, it’s delightfully raw and filthy and we still enjoy it now. I think it’s fair to say we took a less refined approach to the first EP with much of it being recorded live.That first EP really is a thick, meaty slab of Death Metal. Who would you say are the band’s influences that manifested themselves into this release’s sound?
We’re huge metal fans so it is a bit difficult to tease out specific influences as there’s maybe a little bit of everything shaping us over time. Ones we’ve named in the past include Immolation and Dissection, there is probably a bit of Cannibal Corpse in there too and maybe even some King Diamond guitar wise (though I should do some more squealing).You made the tremendous decision of releasing your second EP, ‘Submit to Death’ on both CD and Cassette. How likely are we to see a ‘Nourish Me, Satan’ re-release on cassette?
Good question! I think it would depend on there being enough demand for such a release. Then, we’d be happy to make the investment for the people that want it.If anything, ‘Submit to Death’ is an even more thunderous release, and the production levels have improved also. What differences were there in the recording of this EP compared to the first?
Firstly we used Priory Studios and a renowned metal producer named Greg Chandler who’s produced quite a bit of stuff in our CD collections (such as Esoteric, Chte’Ilist). A thing I remember particularly is that we did the initial tracking as a band, where we did it individually before. We also took more time to refine the sounds of the instruments and to refine our takes for precision. There were more different guitar tracks on this one and some additional instruments such as piano and even a gong! We also had a little more time on our hands than we did before, though we still had to cut a song in the end.

How has the feedback been to both EP’s so far? Any particular comments or reviews that stick in the memory?
It’s always fascinating to see what people think when you release your musical babies into the wild. A lot of journalism we’ve seen internationally is generic b*****s, where some journos who took time to analyse the music go absolutely mental for it. As you can imagine we enjoy the latter! The vast majority of what we’ve seen is written about ‘Submit to Death’. Someone did call it ‘genius’ whereas another keyboard warrior said we don’t know how to write songs and can’t play our instruments! Sure thing, bro. I enjoy it the most when they engage with the emotion in the music, really. 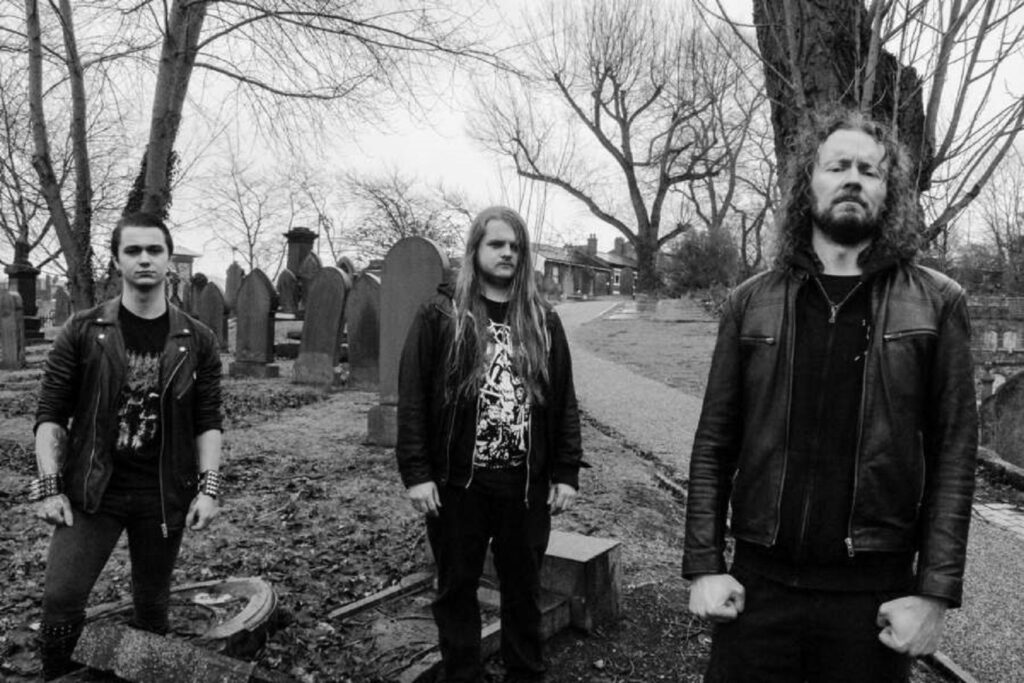 It’s very common for people to be in multiple bands. Are the three of you active in or working on any other projects right now, or is it Infested Angel only?
Infested Angel is my main focus. Very occasionally I perform with an experimental acoustic noise act called Brutar Weimaz. Our new bassist Chris is in Reign of Fury and Pat also plays drums in Hannah

Are you working on a follow up release to ‘Submit to Death’? Any details on the lyrical themes on your next release, on the formats, or even if it will be a full length?
We are going to take some time before our next release, but we have started to prepare new pounding odes to misery. We will use our time to craft the best possible songs we can muster. Our intention is for our next proper release to be a full length. Though we won’t do it unless we’re absolutely confident in the quality of the production and of the songs. Lyrically, it will most likely continue along a similar vein, with bits of social commentary thrown in also – you will see from Submit to Death that we talk about fascism and pollution.Do you follow the UK underground scene much? What bands and labels have been on your radar and deserve more attention?
We’ve been lucky enough to share the stage with quite a few quality underground bands and can certainly name a few. We’re fond of our Southampton slam brothers Embolectomy and also a black metal band from Tamworth called Decimated Cross. These each need more love and exposure – keep an eye out for them, because they are quality. In terms of labels I think most bands are self releasing, though Wulfhere Productions are releasing a lot of quality black metal.I have not had the chance to see you live. What can people expect from an Infested Angel live set?
Expect growls, sweat, headbanging and blast beats. Honestly we give it our all and we’re so happy to be able to do this. We hope that audiences feel it and lose themselves in the music – just like we do.That’s all I have for you. Thanks again for answering my questions. I’ll let you have the final words.
Thank you very much for your time. Everybody keep supporting the scene, come along to one of our shows, grab some merch and SUBMIT TO DEATH!