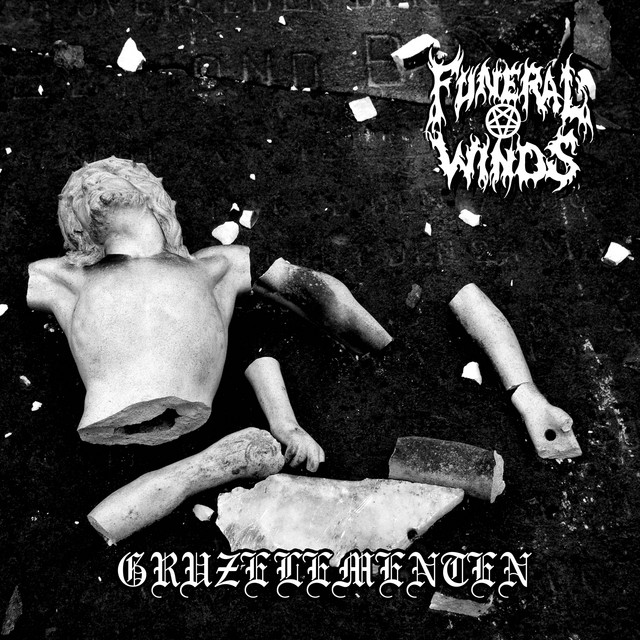 Sometime after the release of 2007’s ‘Nexion Xul – The Cursed Bloodline’, Hellchrist Xul brought Funeral Winds back to what can be considered a solo act. He still gets some help with a few things here and there, but he is largely responsible for his own musical product. And that has its advantages. Not only can you do whatever you want musically, but you can also set the pace at which you work on your music. Seen from the formation of Funeral Winds in 1991, the 2007 ‘Nexion Xul – The Cursed Bloodline’-album was only the third full-length album. This ‘Gruzelementen’, which came out in late 2021 via New Era Productions and Hellchrist Xul’s self-directed Necromanteion, is the third album in the last three years. So he really got into the swing of things.

Hellchrist Xul has also opted for another label with New Era Productions, leaving the stables of Avantgarde Music. New Era Productions and Funeral Winds previously joined forces for 2015’s ‘Sekhmet’ 7″ EP, so this collaboration is not entirely new. Not that Funeral Winds is making a really drastic stylistic turnaround, but with the label-change, the music also seems to be taking a slightly different turn. The two predecessors ‘Sinister Creed’ (2018), but especially the penultimate ‘Essence’ (2020), were not the most easily digestible works. The sound was quite gritty and the songs somewhat inaccessible. On ‘Gruzelementen’, which from Dutch would best translate to ‘shivers’ or ‘smithereens’, Funeral Winds actually sounds remarkably catchy. The sound is cleaner, the riffs are catchier and Hellchrist Xul’s vocals are more hateful than ever. This comes together in a rather Norwegian sound, in which rolling double kick drums, a sawing guitar sound and the generally high tempo tumble over each other, but without getting bogged down in an inextricable tangle. The only resting points that give you some breathing space are a few short ambient passages. For instance, at the beginning and end of ‘Lunar Darkness’. Here, they act as an introduction to the music and provide a fitting bridge to the lingering riffs. The relatively short playing time of around half an hour is also certainly crucial part of the effectiveness of ‘Gruzelementen’, this way the attention remains 100% there and the songs come into their own best. For the Dutch (and Dutch-speaking Belgians) among us, the return of some Dutch lyrics is also a real plus, the title track, for instance, nestles alongside the best Fluisterwoud songs and proves that the Dutch language and Black Metal are more than just a good match.

Without discounting the predecessors of ‘Gruzelementen’, this new album is really quite a lot better. Where its predecessors certainly also contained their good elements and displayed decent musical ideas, on ‘Gruzelementen’ everything seems to really fall into place. Hellchrist Xul squeezes good and catchy riffs out of his guitar, but does not sacrifice anything in terms of aggression and dirtiness. Elementary to this is also the sound quality. In short, we haven’t heard Funeral Winds as good as on ‘Gruzelementen’ before. (FelixS)