Entrenched – “The Boss HM-2 sounds so nasty yet so appealing”

Oh yeah, when the sound…sorry, THE sound comes across, I’m all ears. Some are fed up with the HM-2 for years again, thanks to the revival or as they call it “overkill”, but me personally…I can’t get enough of it, as long as I hear quality in the rotten Death Metal. And I did enjoy the demo of the Polish one-man project Entrenched. All the ingredients are there; sound, groove, variation but I did mention it felt like there is some distortion on the vocals, like Dismember’s Matti Kärki did during “Defective Decay” on the “Like an Everflowing Stream” album. Michal will tell me, and you, if my guts were right or not…in the mean time, let start with the question why he started this all…

The simplest answer would be: COVID made me do it, ha! With the global lockdown in March 2020, I finally had some time to setup my own little home studio and that’s how it all started. Recording riff ideas, then making whole songs. I ended the year with some 20 more or less finished songs (instrumentals only, no vocals). So, the next step was to “form” a band. Or a one-man-band more precisely. Why one-man-band? Well, it’s so much easier in a way. The technology is so advanced that it’s not a big deal to record all the instruments by one person. And as I’m quite a busy man, it was just easier to make everything on my own. Of course, during the recording of the first demo, I quickly realized that working solo isn’t so easy. There is no one around to advise or to simply tell you: “oh, that’s not good, try something different”. You have to rely on your own opinion, trying to be objective. Which, of course, isn’t that easy.

For you…is it the buzzsaw tone? With the combination of the typical groove and melody? Or something else?

Oh, yes, the buzzsaw tone! This is a love it or hate it kind of tone. I love it. It’s like Anders Nystrom from Katatonia/Bloodbath once said “Even a straight E-chord ringing out sounds so heavy and intense that it’ll make me go, ‘Wow, that’s a killer riff’, it’s ridiculous”. The Boss HM-2 sounds so nasty yet so appealing.

But you’re right – there is also the groove and the melody. I always look for melody in music. If you listen to Swedish death metal, there is plenty of melody in it. Plus there is a lot of groove and you will find so many different influences there: punk, crust, d-beat,  rock n roll. I mean – it gives you so many opportunities. You can play old school, nasty sounding death metal that is more rock n roll than many current rock bands are!

Which bands grabbed you by the throat and influenced you with the sound and songwriting within Entrenched?

Who influenced me the most? Well, Entombed, Dismember, Grave, Unleashed – that’s obvious. And then so many other bands such as Lik, Interment, Crawl, Entrails, Bastard Grave, Centinex, Demonical. There is so many.

Before we start on your own music, in your opinion which release(s) absolutely defines the genre you’re playing? Is it Entombed’s ‘Left Hand Path’ or Dismember’s ‘Like an Everflowing Stream’ or maybe a Nihilist / Nirvana 2002 demo, Carnage’s debut? Another album?

That’s a tough question. Entombed with ‘Left Hand Path’, ‘Clandestine’ and ‘Wolverine Blues’ is such an obvious answer. And if I say Entombed, I must also say Nihilist demos. Then Dismember of course! They have a great discography. With Entombed, there are some good and some ‘less’ good albums (and no, I don’t think about ‘Same Difference’ – I really love this album!). And Dismember was so consistent throughout their career!

So, Entombed and Dismember definitely made the scene big. But I think that we have to give credit to all those bands that kept the spirit of the chainsaw sound alive. Bands that made the ‘revival’ of the buzzsaw tone possible: Lik, Bloodbath, Entrails, Tormented, Feral, Crawl, Interment, In Pain, Carnal Savagery, Maim, Disrupted and many, many more! 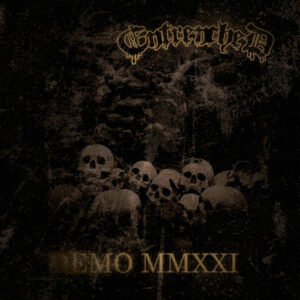 Tell us all about your demo; Demo MMXXI”…and are there any distortion like effects on your vocals?

Oh well, the writing process was quite normal – I just sit with my guitar and play. If there is a good riff coming, I record a video on my phone. So yes, my phone is almost as valuable as the one Kirk Hammett from Metallica lost a few year ago, haha. And then I start recording it. Sometimes I have a full song ready to record, sometimes I have 1 or 2 riffs and I try to add more while working in my ‘studio’.

The artwork is a photo I’ve taken in Przemysl in the local cathedral’s crypts – there was an ossuary discovered there some time ago and this is how it looks like. Once I took the photo, it seemed perfect for a cover. And so I used it.

The reactions to the demo were positive – a few ones but positive. I read that the demo sounds similar to Bolt Thrower. Then someone else said Dismember. And another one – Entombed. So that’s really cool, as Bolt Thrower is so much different than Dismember, etc. So, it seems, from the audience perspective, that the music is quite varied, which was what I was looking for. And all these bands are definitely an important influence.

As for the vocals – no distortion at all, ha! Well, this is how my vocals sound. It was my first attempt ever at recording growls, so it may happen that I’m doing something wrong or that my voice isn’t simply good enough. I don’t like hearing my own voice, so it was really tough to hear my own vocals, ha! But sometimes they remind me of the way Karl Willetts from Bolt Thrower/Memoriam sounds and that’s pretty cool!

I’m not a big fan of gore lyrics, typical for death metal bands. As a big fan of old thrash metal bands, I always liked socially involved themes. Or lyrics you can find in old school British death metal – Bolt Thrower (and Memoriam nowadays, of course) is a big influence – war-themed songs that focus on the disastrous consequences of every conflict. Karl Willetts is a huge inspiration for me!

So, you will find this kind of lyrics in Entrenched – mostly war-themed but also more socially involved ones. Are lyrics an important aspect of the band? Yes, they are. Of course, not as much as music itself, but they definitely are. They are some kind of a statement. They define, in a way, my point of view on humanity and where we are heading to. And of course, that’s not too much optimistic. 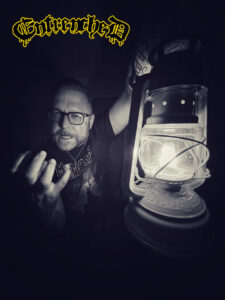 What are your expectations for Entrenched in the future?

Well, a second demo is in the making. In fact, it’s almost done. I need some month or two to polish everything. There should be 6-7 songs on it. Maybe a cover – a cover of a half of a song serving as an outro. The style is pretty much the same. The new ones seem maybe more mature – at least it’s how I perceive them. Basically, I feel they are better songs that the first demo. It’s my own opinion, of course, but I think this is a driving force in the creative process – you need to feel the song is good in order to finish it, record it, etc.

I didn’t contact any label, to be honest. It’s just a matter of being very busy with my day to day job. But it’s definitely something that I need to do once the second demo is released.

Are you involved in any other way in the music scene?
Well, in a way – I run a small business which is called 59 Parts and which specializes in aged/reliced guitar parts, mainly for Gibson guitars. So, yes, I’m involved in music but my clients are mostly blues and rock guitarists. So, they don’t even know I’m a metalhead, ha!

Are there any bands or albums of your recent playlist you would like to mention?
There is a Polish band called Abominated which released a demo in 2021 and every HM-2 fan should check it out! The tone is awesome! And they’re also from Warsaw. Other than that I’ve been recently listening to a lot of Bombs of Hades, Wolfbrigade, Envig, Crawl, Interment, Memoriam. The new Lurking Fear album is excellent. And also the debut album by Grand Cadaver.

I recently discovered a US core band Xibalba – oh man, they’re heavy! I really dig what they’re doing! They definitely have the Bolt Thrower heaviness!

And there is a brilliant album that is, at least that’s how I feel about it, overlooked – Disfear ‘Live the Storm’. It’s a masterpiece of d-beat with an awesome guitar tone, great lyrics and amazing rock n roll vibes.

Also do you have favourite labels you always keep an eye on when they announce a new release? Or a favourite illustrator / cover artist? Any favourite printed / online zine?
Well, I like to check new releases from Pulverized and Transcending Obscurity – because obviously they release a lot of old school death metal. Printed magazines are mostly dead here in Poland. There is Metal Hammer, which I stopped reading some 15 years ago as the content is mediocre and the writing is mediocre too. There are 2-3 more underground magazines but they focus more on black metal and here too, the interviews are very often so boring and generic. So, nowadays it’s much easier to follow bands on FB or Instagram or to watch interviews or podcasts on Youtube.

Before we wrap up this interview, do you have any final words or thoughts? Is there something I’ve forgotten to ask you which you would like to mention? Thanks for your time!
Thank you so much for giving me the opportunity to answer your questions! Keep the spirit of metal alive, support the bands, share their music, go to gigs (if possible, of course! Damn Covid!)!