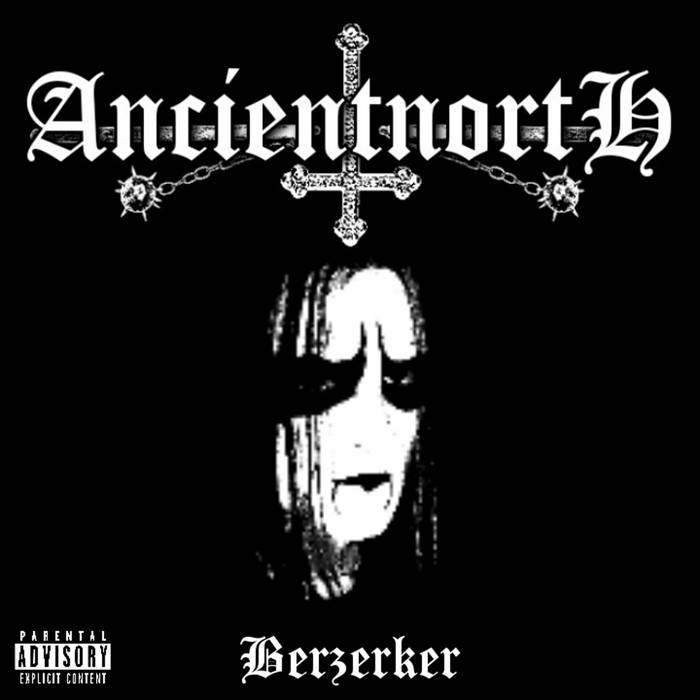 Only two weeks after the release of Ancient North’s debut album through Iron Bonehead Productions, the one-man Black Metal act is already back with a new release. This time Forlorn, the young man behind Ancient North, self-releases a digital three-track EP. The first full-length didn’t leave me all too satisfied because of the lack of enough memorable songs and riffs, despite all the effort that was put into the attempt to establish an authentic Norwegian sound. Let’s see what Forlorn brings to the table with ‘Berzerker’.

After a short intro, in which we hear a Barbarian general ask Arnold Schwarzenegger, as Conan, what he thinks is the best thing in life. Of course we already knew the answer: “To crush your enemies, see them driven before you, and to hear the lamentation of their women!”

What follows is not oiled-up, muscular Manowar, Manila Road or The Gates Of Slumber-style heavy metal, but are Forlorn’s new homage to the Norwegian Black Metal scene. On the debut album, ‘The Gates’, Ancient North still sounded like an almost exact copy of Immortal’s ‘Pure Holocaust’, Darkthrone’s ‘Under A Funeral Moon’ and the first three classic Gorgoroth albums. Unfortunately, without even coming close to the quality of those iconic records. The monotony of the tempo and the lack of memorable riffs make it quite an underwhelming debut.

Forlorn takes a different tack on this eleven-minute EP. Well, not radically different. The influences are still Norse, but they are no longer Immortal or Gorgoroth, but the Carpathian Forest, Nattefrost, Urgehal, mid-era Satyricon keg is now being tapped. So fa there is, however, one consistency within Ancient North’s sound, which is Darkthrone that is still very much in the picture, this time around it has more resemblances with Darkthrone’s 2003-album ‘Hate Them’ (Moonfog) though. The cold, somewhat militant and repetitive riffs with the so characteristic buzz-saw guitar sound gets crafted into tasty grooves. And although, just like on ‘The Gates’, the level of for example Urgehal is nowhere reached, a direct comparison with the best work of that band, ‘Goatcraft Torment’ (2006, Agonia Records) is very much in place.

After the downright mediocre debut, Forlorn has certainly succeeded better with this EP in coming up with something that rises above the average level. The nice grooving, almost swinging saw-sound tastes very well and manages to pique my curiosity for upcoming work.