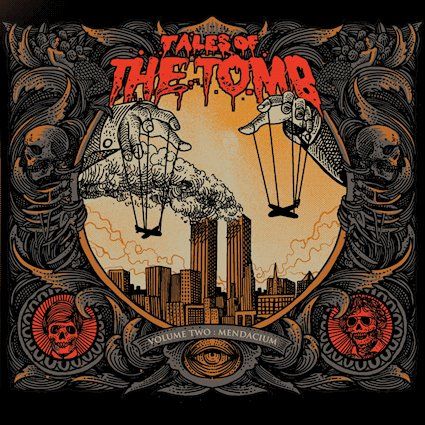 Tales of the Tomb are a Death Metal duo from Edmonton, Canada and “Vol. 2, Mendacium” is their second EP following up “Vol. 1, Morpras” from 2015.

The band weaves tales of murder, aliens, disasters and mysteries across the 5 track EP touching on subjects like 9/11, Alien Conspiracy and Waco Texas in a tongue in cheek kind of way. Musically this is fairly standard Death Metal with occasional hooks that grab your attention and some Punk/Thrash riffs thrown in the groove. I would compare them to Impetigo and Exhumed, although they aren’t breaking any creative barriers, the riffs are solid and well presented. I mean a band writing a song about Paul McCartney dying in an auto crash and having his head sewn back on cant take themselves too seriously and I imagine are just in it for the sheer joy of playing straight forward Death Metal.

I thought the concept of the band was a genius idea, its kind of reminds me of an audio version of Body Bags or Creepshow, a compendium of weird and macabre tales. If you are looking for straight forward, no nonsense Death Metal with tales of horror then check out “Vol. 2, Mendacium” and their first EP “Vol. 1, Morpras”. (Ted Gloom)