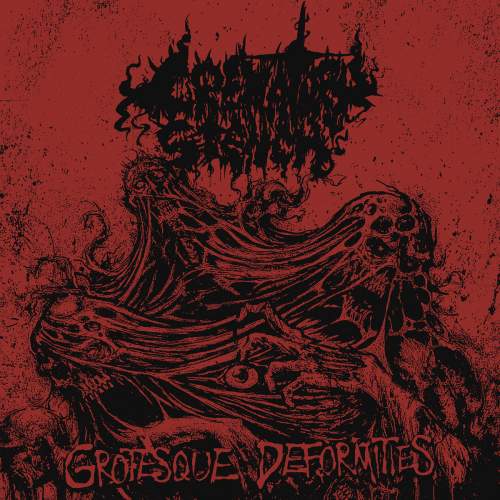 Crematory Stench is a force of unadulterated Old School Death Metal from Costa Mesa, California; the four-piece has been around since 2014, and Grotesque Deformities is only their second release, yet they are generating a large amount of buzz. If you don’t know them already, let me assure you, the hype is well-earned; transporting you back in time, Grotesque Deformities is carrying the torch of the old ways.

Crematory Stench is Erick Cruz on bass, Matt Valencia on drums, Josey Aguilar on guitar and vocals, and Jake Himelfarb on guitars. Every musician present knows their instrument very well, and plays like they’ve been doing this since the inception of Extreme Metal; creativity abounds in the four principle songs, crafting some of the finest grimy Death Metal you’re likely to find. Erick Cruz creates substantial bass lines that add a fullness to the music; co-helming the low-end, Matt Valencia beats the skins as if they owe him money, with plenty of variation on the kit, there isn’t a complaint to be had. Josey Aguilar and Jake Himelfarb drive the buzzing guitars and create some hammering and dragging riffs alongside the speedier ones; fiery solos burst forth from the miasma and grab your attention, never letting go. Josey also handles the vocals, and they are the otherworldly howls of a cultist mad-man, that is to say, they are perfect.

The album is four songs and an intro titled “Interlude,” which I hope promises a forthcoming compilation release. The first song is “Septic Offal” which comes in quiet, but the hammering drums are quick to shatter that; what follows is a prime example of how to do Death Metal properly. “Grotesque Deformities” opens with a cocking shotgun before firing the snare hit right at you, and the song remains at its high pace for the short run-time. “Hypothermic Expiry” is slower and a little longer, showing off their mid-paced chops (and reminding me of other acts I love, which I’ll get to in a moment); ending on an eerie and static-filled soundscape that bleeds right into “Slumber,” which takes those ideas to new heights and is the album’s best song. On these last two tracks, I’m reminded heavily of Krypts, the way they sound when they speed up is how Crematory Stench sounds when they slow down.

Honestly, the worst thing I can say about this EP is that it ends way too soon; I’m getting into it, headbanging away, and suddenly it is over and I’m greeted by silence. I just have to hope that the group is busy creating more of this sick music. If you’re even passively into Death Metal, you need this band in your life. Now if you’ll excuse me, I’m going to go light a fire, play this EP and hopefully summon a tour. (Ethan)