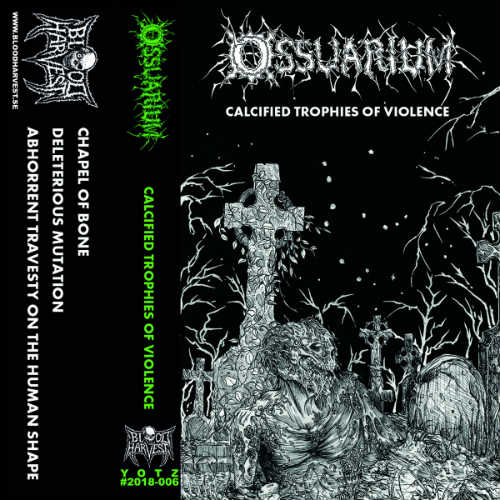 Took a different route with this review as I’ve done this bands discography backwards, I reviewed their new full length a few weeks back, which is an absolute must if you’re into Death/Doom. But when the lovely lad Ricardo asked me if I could do their demo i was more than happy too!

Having familiarity with an album can go a long way and this demo I am VERY familiar with. I instantly bought it when it dropped back in 2017 and it hasn’t lost an inch of heaviness. “Chapel of Bone” instantly kicks you in the chest with a huge crash on the cymbals and then Daniel Kelley shows you his filthy side with his OSDM vocals. The song kicks and scrapes about a minute in with filthy blastbeats. Coming from the murky mud of Portland these guys know how to write a heavy song.

“Deleterious Mutation” is the shortest of the 3 song demo but also shows off the playability of these guys with fast riffs and definitely a more OSDM sound without the doom elements these guys are known for. It’s a circle pit starter that i’m sure KILL live. One of my favorite Ossuarium songs actually

As we get to the final act of the album with the banger, “Abhorrent Travesty on the Human Shape” it almost complements the first song with the slow soul crushing start into some of the vocals that they are known for but really picks up after the little intro riff. The consistency of these guys is amazing and having done their full length also these guys show no signs of slowing down. Solos are sick, drums are tight, vocals are filthy. It’s everything that makes death metal great and I’m sure these guys are bound to blow up with their signing to the almighty 20 Buck spin. Really excited to see what the future holds for these guys. (JonG)