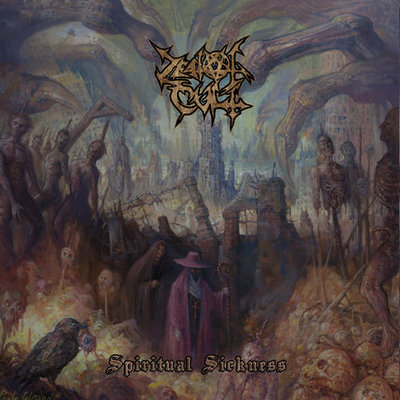 From Limerick, smashing Death Metal hits since 2008…ladies and gents..Zealot Cult. “Spiritual Sickness” marks their debut album, after releasing the demo “Zealot Cult” in 2010 and the EP “Karmenian Crypt” in 2016. Bloodh Hrvest did well to release this monster of an album. What`s the deal? Death metal all the way. Jay sounds like a Van Drunen / Mameli twin (just sick) with some deep grunts and even a Steve Tucker style from time to time.  The guitars carve their way into flesh, the bass let`s your guts vibrate and the drums pound everything into dust.

The music is mostly Death Metal the American way, to me first and foremost Morbid Angel inspired with hits of Pestilence and not only on the vocal department. With mind-blowing leads here and there when necessary, doomy sections (like Morbid Angel’s “Where the slime lives…..”), chaotic tremolo and chord work, breaks and tempo changes like on the classic albums. Also blast beats, skank beats, back beats, fills, breaks…everything Death Metal drumming has to offer. This album offers a lot of details as it has this old school vibe and riffs without sounding too retro. In the middle of the album you can find yourself thinking about Death, hearing some similar riffing and drumming. Even a latin beat makes its presence and gives the song another facette. The productions is well balanced as it is not too pumped up…this was worth the wait. Fans of Morbid Angel (almost from every era, mostly early material), mid Pestilence and Death should write it on the bucket list immediately. Top notch!  (DPF)