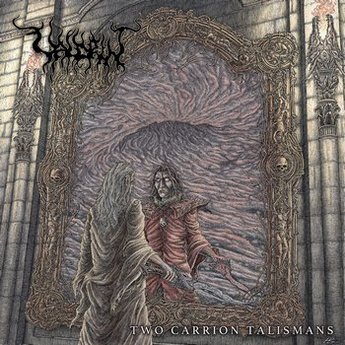 Captivating artwork by Lucas Ruggieri, organic and well balanced production (bass drum maybe with less trigger, but it is working well), excellent song writing taking Death, Black and Thrash metal elements and twisting them into a dark, Ancient like shape, that varies from pure aggression to fantastic landscapes. Also thanks to the occasionally spread keys which add a more dark hypnotic atmosphere to it. Tempo changes don`t seem to be a problem and are used in a perfect manner. Melodic leads from outer space, riffs that crossed oceans from Norway to Florida and back, combining Emperor, Ancient, and some mostly American induced Death and Thrash metal (I feel no need to list names at this point) and others into a Black/Death cocktail that is far superior than most of the albums I`ve listened to this year.

To make this even more outstanding, the concept seems to be complex, combining mythologies and occultism and making an own interesting mix lyrical wise. Mid 90s feeling without sounding to retro and with some fresh ideas which makes this album a very strong release. (DPF)