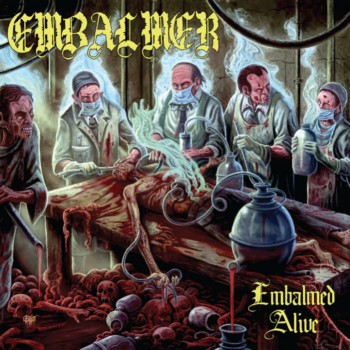 Legendary Death Metal band does live album. This is the point in which you either shit your pants and say yes, or cringe because you don’t think it will be any good, as some live albums can, and let’s be honest, suck some major arse. This one, fortunately for us, does not. The God’s of good recording where definitely on their side with this one, and it’s pretty hard to even pick that it is actually live to be honest. Maybe this is a collection of songs put together after a few gigs, not too sure, but it all goes down quite well. You also get a few bonus tracks (“Taxidermist” and “Projectile Vomit”) that have never been officialy released,so you can’t complain about that either.

The content? Well if you don’t know who Embalmer are, have been living under a tree in Brazil, or are just plain new to this shit, are a band that like to pummel you around the brain with their particularly nasty take on the whole gore filled Death Metal thing. Yes you may have heard this kind of music before, but you have to remember, these guy’s where at the vanguard of this whole kinda shit. Many have flattered them by following suit, and when I say many there are now a thousand fucking bands doing this kinda stuff, and they get a tad boring after a while. It would be easy to say ‘I’ve heard this all before’, but that would only apply if you are new to them. For those of us who know, we tip our hats at their collective awesomness.

I’m not such a huge fan of this kind of stuff anymore just because the scene IS over saturated with wannabe’s and try hards. Having said that, when the bringers of such excellence from years gone by decide to slap you up the face and remind you of just how damn good they are, one must stand up, even if it doesn’t sound as ‘live’ as you expected, this is a damn good listen.  (The Great Mackintosh)