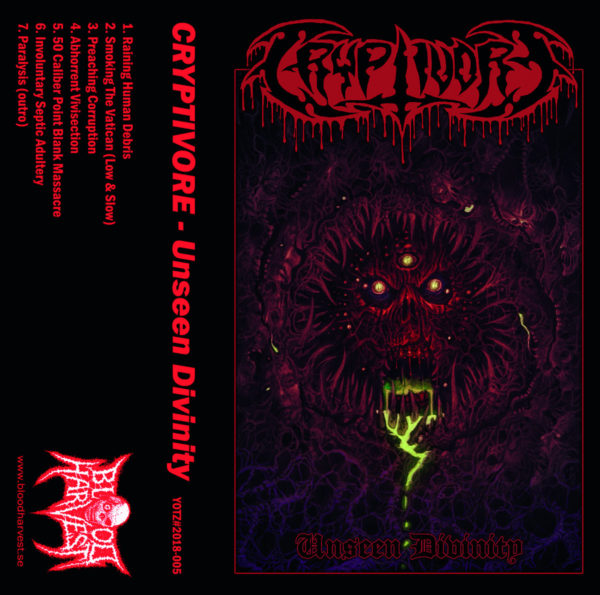 Wasting little time Cryptivore launch into a hard hitting Old School Death Metal sound that is equal parts Entombed and vintage Death. Think “Left Hand Path” mixed with “Leprosy” and you have an idea of what to expect. How the hell is a band in their demo phase this damned good?

The vocals roar and add a perfect layer of filth to this style of Death Metal. The riffs are generally fast and to the throat but the band is not afraid to slow things down for a killer groove or little melodic sections that Death were known for. The stomp riff at the start of “Smoking the Vatican” will have you banging your head long before it speeds up into blast beat territory. This is one of my favorite tracks due to the tempo changes and the transitions between thrash tempos and blasting. This track also brings in hints of Autopsy as well to great effect. The majority of the songs have a strong Swedish death metal feel to them so you can expect a lot of thrash tempos and I wouldn’t want it any other way. A vintage Carcass influence pops up every now and again, the most noticeable on “Involuntary Septic Adultery.” Even the song title reeks of Carcass!

This is easily one of the best demos you will hear in 2018. This is well written, energetic and just heavy as hell death metal perfection. A full length release can’t come soon enough! (MikeH)