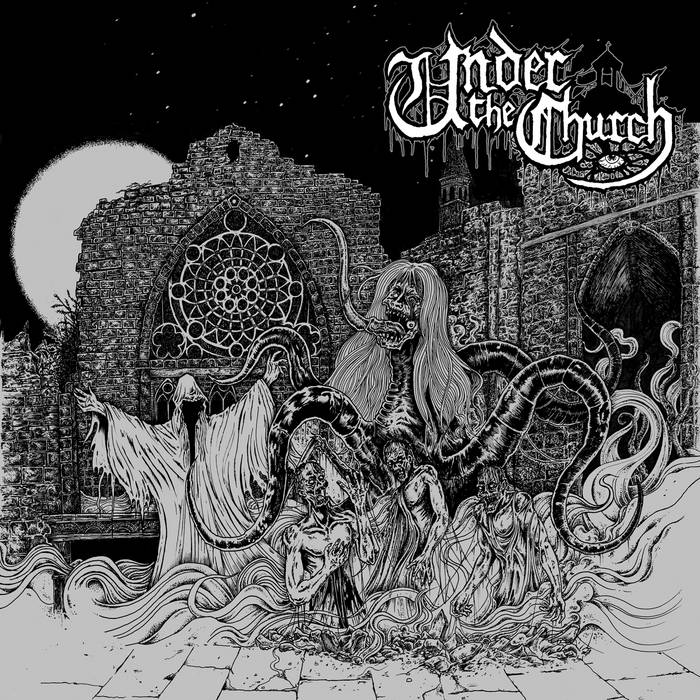 Hell fuckin’ Yeah!! Already a note to all technical fetishists out there…You don’t have to show off your technical abilities, freakin’ out on your 17-string guitar and putting 21 non-headbang-able riffs in one song to be brutal or a good musician. Write songs, Under the Church proves it! As mentioned in our first issue, 2 ex-members of Nirvana 2002 grabbed their instruments again, created some great Old School Swedish Death Metal and made sure hell broke loose with their 3-track demo in 2013. Pulverised Records agreed with Lars Henriksson and Erik Qvick that the SweDeath in the vein of the starting bands of that scene (let’s pick the year 1988), was a good idea as foundation for Under The Church. Erik seemed to have mailed Pulverised Records just to gain some feedback on their demo material, not having the urge to release a full-length or EP whatsoever. Pulverised Records thought otherwise and persuaded Erik to sign a deal. And believe me, be glad that they did. With session vocalist Mik Annetts becoming a permanent member, Under the Church fires 7 primitive yet effective Old School Swedish Death Metal (Nihilist, Nirvana 2002 (…no shit Sherlock!), Carnage) within 21 minutes, leaving a debris of what was once your nearby environment. Raw as fuck! So if you are attached of your grandmother’s photograph on a cabinet, bring it in safety because it will be grind to powder. The demo tracks are on this EP as well, so frankly you get 4 new tracks of which “Digging In The Dirt” is my personal favorite. A great main riff and pummeling drums underneath it, it’s so simple…you just have to do it. If you consider yourself as an Old School Death Metal fan, this EP has to be in your collection! (Ricardo)