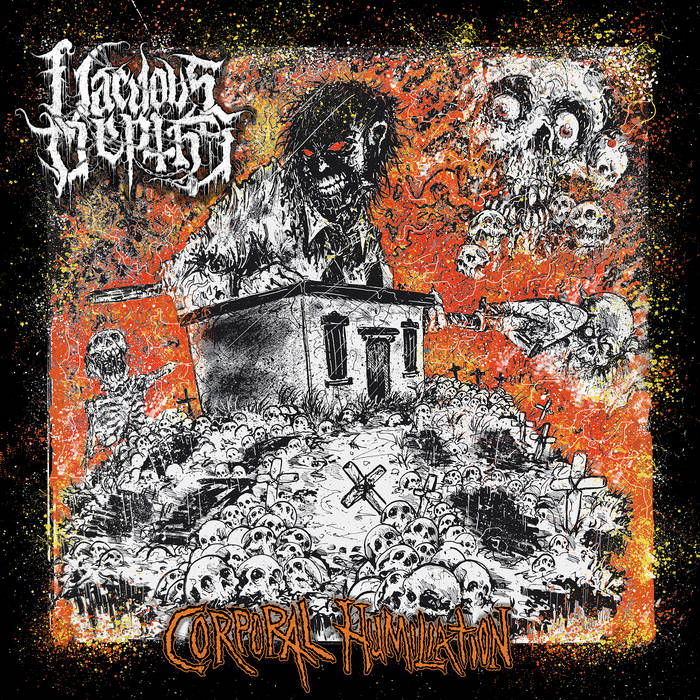 In 2017, Vacuous Depths inserted themselves into the vast legion that is the US Death Metal scene. They dropped a debut demo that was picked up and put out on cassette by Goat Throne Records, but since then we have had radio silence in terms of releases. This November though will see this Florida trio return with a debut full length album entitled ‘Corporal Humiliation’, again on cassette but this time with label support from none other than Death Metal specialists Blood Harvest, Chaos Records and once more, Goat Throne.

‘Gold Crosses’ is a bass lead heavy opening track featuring feral growls and howls from vocalist Austin, as well as guitar tones mired in a traditional US Death Metal sound. From there we hit into the grating chords of ‘Deep Night’ which takes the chaotic pitch of the opening tracks and amplifies it to another level. By the time ‘Exteriorization’ kicks in the album is starting to sound a little one dimensional, all be it well executed in terms of musicianship. That said, vacuous Depth’s excel at brooding, monstrous sounding vocal work and there is a sickening repugnant vibe given off at various parts of the album through putrid sound vocal tones mixed with cranium cracking bass work. Also of particular note is the high quality of the drumming which keeps ‘Corporal Humiliation’ moving along at a fair old lick whilst also creating a cacophonous cauldron of noise!

For my own personal tastes this album doesn’t excite me, but at the same time it’s the epitome of a savage barbaric Death Metal album, unrelenting in its ferocity and driven forward by crushing bass leads rather than the guitars. I can see this album being a popular one amongst the US Death Metal fans amongst you! (Marksson)