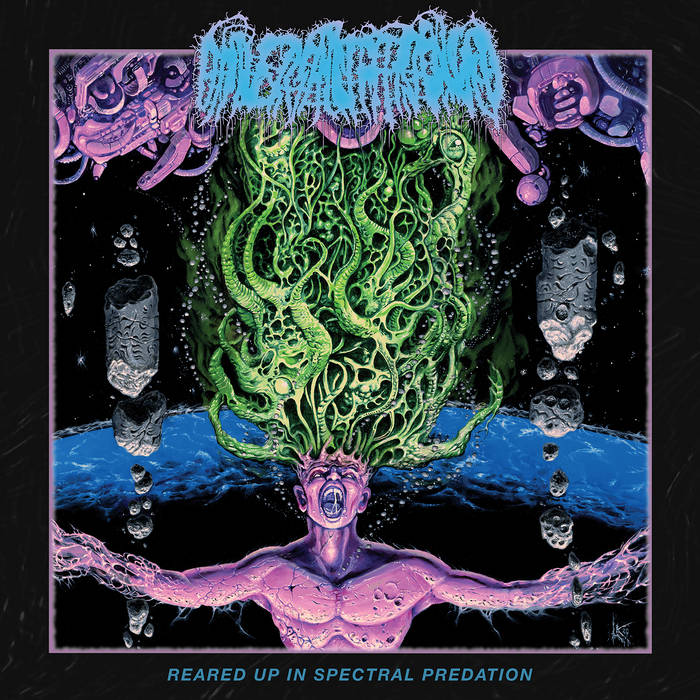 It’s a sweet & prideful moment to find artists based out of your home state; that being said, long live TXDM! Houston based project Universally Estranged skipped the bullshit of teasing with an EP to construct a relatively eccentric concept, taking influence from bands in the vein of Finnish Death Metal , & flaccid yet ample song writing along with melodious scattered solos.

Cover art by Lucas Korte, bears striking resemblance to Demigod’s “Slumber of Sullen Eyes” (timeless classic!); but instead of details spewing from eye sockets, it’s colorful pop of green ejecting from the brain, background includes these paralleled meteoroids on both sides, with the void in the background outlined in blue (I assume being Earth) as this figure is ascended (maybe even astral projected) into some cosmic disperse.

Offers roughly 32 minutes between ten tracks, two being instrumentals titled simply “Intro” & “Interlude”. The other eight tracks present a thick bodied guitar tone, futurism sound effects, otherworldly cadence, swirled into a discordant form. There’s times when it comes off a bit too loosely unconnected in it’s arrangements, almost a bit too much going on wondering where’s the actual focus to hone in on throughout; examples being “The Visitor” & “Sentient Meatsack”, wildly visionary experimentation on the riffs, blast beats with an occasional solo, and tinge of synth giving another dynamic to this inventive Sci Fi Death Metal style.

A couple of tracks I favored more off this LP are the aggressively coarse drum work within “Despoiling Souls of Flesh Across The Galaxy” & “Teeming With That of Unknown Origin” with that glorious guitar work & solo that gives goosebumps! One other is the dreary synth driven “Internecine Psychic Bloodletting” with another electric solo featured. Folks that aren’t into sci-fi in any way, shape or form should skip this & those with appreciation for innovative sound, this is pleasing. Curious to see direction taken next round! (Tori Belle)