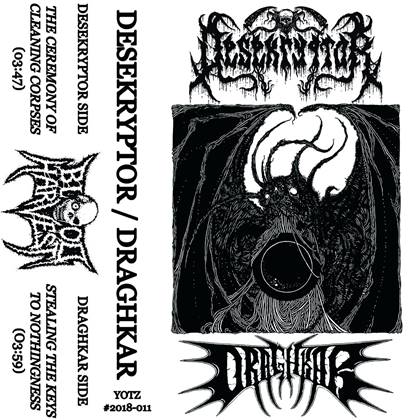 Indiana’s Desekryptor and California’s Draghkar play putrid and carnivores forms of pure and unadulterated death metal from the school of Autopsy to Convulse. They joined as a force and released this self titled split on 2018,  with mutual  collaboration  between  Blood  Harvest  Records  and  Helter  Skelter  Productions.

On 2017, Desekryptor released their “Chasm of Rot” EP and Draghkar released “World Unraveled” EP, where they unleashed their sepulchral metal of death and doomed-out style of death metal that nevertheless retains its old-school classicism. However, on this split Desekryptor offered blood curdling and terrorizing walls of sound, while Draghkar contribution would definitely sound a more up-tempo offering comparing to their EP.

The first offering comes from Desekryptor titled ‘The Ceremony of Cleaning Corpses’. This near four minute track is a gnarling and filthy offering with incredibly twisted and mutilating riffs, hideous roars from an abandoned crypt and ever assaulting drumming; which will leaves you lifeless buried under cold soil.

Following ‘The Ceremony of Cleaning Corpses’,  is Draghkar’s ‘Stealing the Keys to Nothingness’. Offering up four minutes itself, ‘Stealing The Keys to Nothingness’ is a miasmal and possessive track that starts off with a slower tempo buildup before picking the pace up to an all out aural assault. Draghkar rumbles through minute after minute providing you with a sense of perplexing and intoxicating aura of nothingness with it engrossing decaying sound.

The overall production sounds dark and wicked which will capture your inner-self from the very beginning; as ‘Stealing the Keys to Nothingness’ seems like created with this intention behind. This split of two tracks may appear short; but it certainly does more than two tracks and with follow up listening you will feel that, they are forged together to chill the blood and split marrows. Indiana’s Desekryptor and California’s Draghkar certainly a force together and their praiseworthy effort are honestly recommended for the explorers of pure and fetid death metal with genuine spirit and energy.  (Rocky)