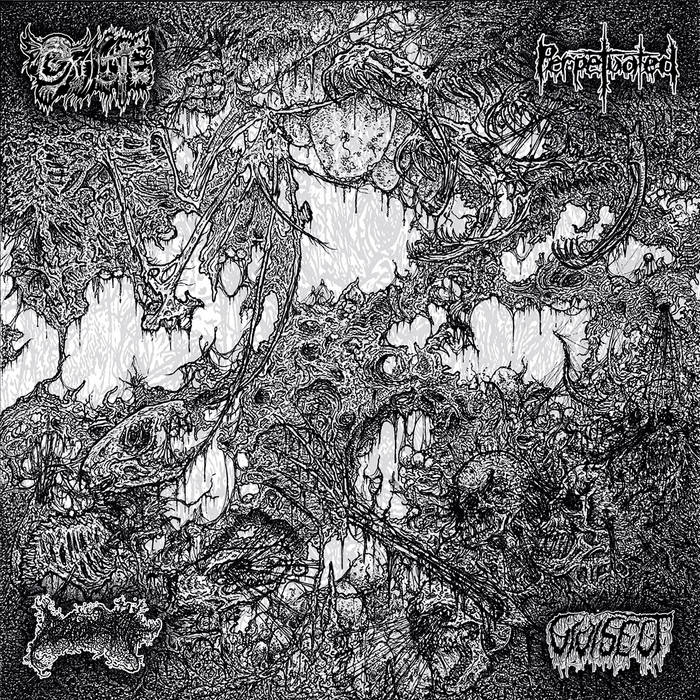 I’ve been enjoying these kind of releases as of late so I jumped at the chance to sample this 2020 released four way US Death Metal split, put out on CD and Cassette by Blood Harvest and with superb artwork! This split release really is a microcosm of the East Coast Death Metal community as it features Oxalate (New Jersey/New York) Perpetuated (Washington D.C) Blood Spore (Philadelphia) and Vivisect (New Jersey)

Each band has a song apiece and things open with ‘Necrotic Descent’ by Oxalate. Slow, brooding guitar leads meld together well with deeply worrying growls, whilst pulsating throbbing bass play sounds out pugnaciously and the drums signal when to march forth swiftly and when to hold back and drop down into a cavernous snarling fury. Topped off with some strenuous tortured guitar leads, oxalate are a decent start to this split.

Next up it’s the more lo-fi sounding ‘Gods Assassin’ by Perpetuated who lack the technical flair displayed on the previous track and so make up for this by hammering out a crushing two and a half minutes of intense Death Metal savagery, with a few solos thrown in for good measure. It’s extremely raw and far from the most cohesive in terms of technicality or musicianship, however it has a nasty grim little bite about it.

Blood Spore and their offering of ‘Dreading the Mycelial Mask’ are kind of the odd one out of the release, in that they play slow, brooding Death/Doom created through pummelling drums, snarled vocals and monolithic riffs that combine well with dark, punishing bass play. Easily the tightest and most cohesive band so far, their apocalyptic brand of nocturnal heaviness is a welcome addition to the split.

And so things are brought to a close by Vivisect and their song ‘Extraterrestrial Proliferations’. A chugging, somewhat sluggish affair this, at least in parts, but with a bleak atmosphere around it and some decent death metal drumming throughout. And so that’s the EP. Four bands, all with their own sound and each one makes this an experience to be enjoyed whilst not offering anything spectacular. (Luke Hayhurst)