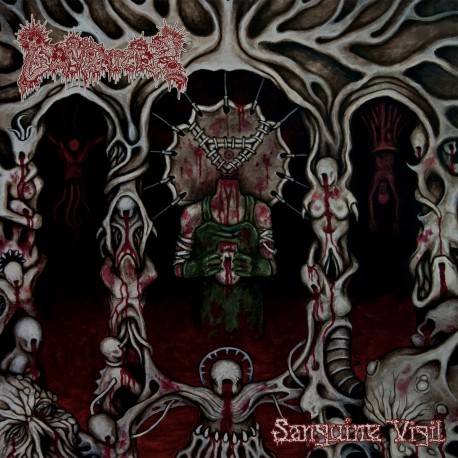 Starting off with a sample from The Burning, Galvanizer waste little time showing you why they are a force to be reckoned within the underground. HM-2 fuelled riffs, energetic drums and barbaric growls are the name of the game here. It’s incredibly heavy yet still very memorable. There is a certain punkiness to the music that shines through mostly in the drumming I would say, which is only reinforced by one of the most natural snare productions I have heard in a very long time. Actually that is one of the things that stands out most about this album to me is the production. It is very heavy yet very natural sounding. I would imagine that seeing the band live wouldn’t sound much different than listening to this album. It is very raw and natural sounding and I definitely applaud the band for going against what is becoming so common these days with death metal albums, over producing. Also of note is just nasty the bass guitar tone is. It adds a snarling low end to the music that reinforces the filthiness of the album. Think Autopsy meets Entombed with some Napalm Death thrown in for good measure and you’ll have a starting point for what Galvanizer sounds like. They don’t fuck around, this is go for the throat and unrelenting. The track “Grind Til…You’re Dead” should give you an idea of what to expect. Not many debut albums have shown this much promise lately and I’m definitely looking forward to this Finnish band being around for a long time! (MikeH)