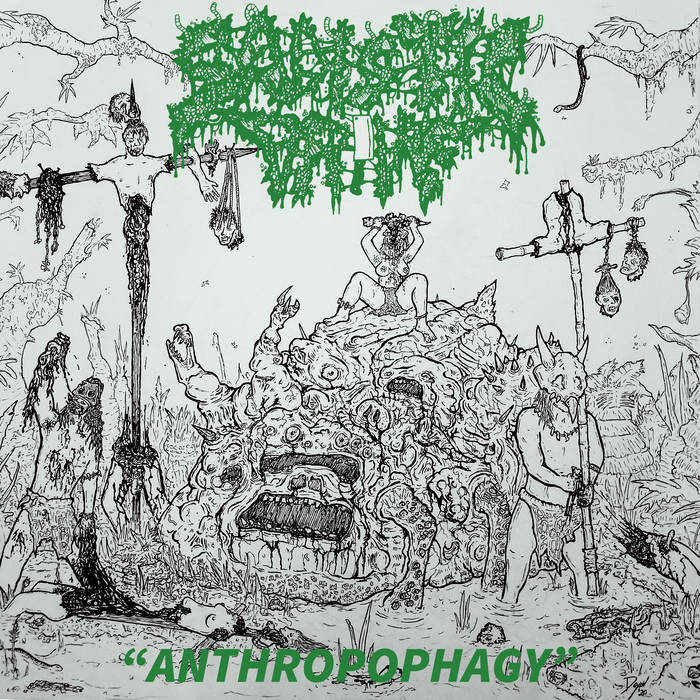 When I was immersing myself in this Finnish Death Metal band for a review for their second album, I was asked if I would also like to review this first one. And as open-minded and docile as I am, I agreed. Besides, it is not a bad idea either, because last year Blood Harvest also released this album on vinyl, so a little extra attention to this debut album by the Finns is by no means unnecessary.

On the euphonious 2018 ‘Street Cannibal Gluttony’-demo, the band still sounded like the aural equivalent of the combined stench of the rotting corpses of Impetigo, Necrowretch, Autopsy and Morbus Chron. Somewhat wacky and disturbing Death Metal with lots of technical and arrhythmic riffs and drum patterns, but on a foundation of profound Old School Death Metal with a tasty Grindy edge. That concept is continued on ‘Anthropophagy’, still the unorthodox riffs are still omnipresent and a comparison with Morbus Chron or perhaps Demilich still stands proud. The share of Autopsy and Impetigo, however, has somewhat diminished. There is still an Old School Death Metal base, but the pure rancidity seems to faded a little. Still, all those different angles do swirl into place well on this debut album, this is also partly due to the slightly less rough sound that makes the technical aspect of the musical compositions in particular stand out better. Fans of the pure blubber sound may be less enamoured with this direction, but I do understand Sadistic Drive’s decision to take this path. All in all, a fine debut for these Finns. (FelixS)