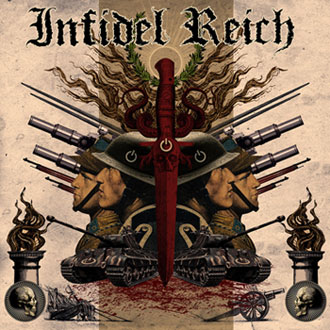 Beware Social Justice Warriors! Beware offended internet crybabies! Beware you politically correct bastards! Infidel Reich is here and more ready than ever to kick your teeth in! This fine piece of “Reality Metal” is brought to you by (ex-)members of Asphyx, Soulburn, Acheron and Rectal Smegma and are calling to arms when it comes to the (online) influence of nowadays media, religion and most of all…nowadays generation. You know, those people who are using terms like “fascist” and “nazi” when you don’t agree with their views. Or trying to destroy ones reputation with a simple Tweet or Facebook post with those terms, because they are offended by something. Sadly enough those individuals and groups are blind to see that they are acting far more closer to those terms than the ones they are accusing of…I can only applaud acts like Infidel Reich to give those people a musical reality check. On this EP you will hear primitive thrashy Old School Death Metal with groovy riffs, roaring bass (just listen to “Generation so Fake”) and hard hitting drums. Influenced by Carnivore, Motörhead, Celtic Frost, Venom, early Bathory and Hellhammer and if that doesn’t make your Old School Metal heart beating faster, I don’t know what will. It’s not like Infidel Reich is walking on or searching for new paths…hell no! They know what they’re good at and by keeping it simple, it is effective as carpet-bombing. The production certainly does help to gain that, it is crusty, gritty and dirty, but all done in the right way as every instrument is clear in the mix. Top-notch EP and already looking forward to new material…Take a look at the lyrics and artwork. Do you feel offended? Good…. (Ricardo)