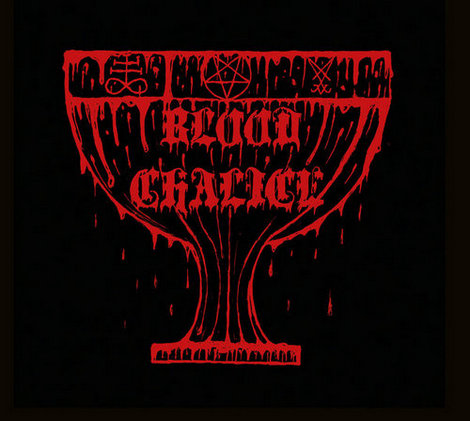 Helter Skelter Productions recently reissued the 2016 demo by Finland’s Blood Chalice, and this being my first time hearing it, I’m glad they decided to give it this treatment as it’s a highly enjoyable sampler of this filthy, deathly black metal band’s punishing wares. This cd is five songs which run just shy of eleven minutes in total, each track dripping with rancid bile and night-black menace. Their sound here is that raw and primal early black metal style with tinges of barbaric death metal, similar to what was being churned out of the late ’80s/early ’90s by groups like Havohej, Archgoat, and Lord Foul, with a visceral focus on simplicity in the music, and lyrically, a morbid fascination with death and the black arts.

The riffs bludgeon the listener like stone clubs wielded by towering, lunk headed cavemen, lurching and pounding, the hammering drums blasting in like cannon-fire. Vocalist Pessi Haltsonen (also from Torture Killer) brings his maniacal best, barking out rapid fire vitriol and delivering bloodcurdling screams with a commendable range that is used to appropriate effect as the songs alternately call for it.

There are some moments where the rolling, serpentine grooves undulate in a manner evocative of classic Morbid Angel, there’s a relentless barrage of blasting and furious screams to appease war-metalling fans of Black Witchery or Goatpenis, and some very catchy riffs; the shout-along chorus of “Saint Fornicator” is a big highlight, and the closer “Unholy Glorification” features some truly impressive throat torture from Pessi, who switches from a guttural gurgle to soul-chilling shrieks which, again, strike a perfect dynamic within the musical structure.On “Necromancy”, the tempo is somewhat monotonous, as the song details the unholy revival of a corpse from its grave, the vocals a monosyllabic chanting with a compelling force that might cause some hypnotic, zombified state for the listener if looped on repeat…. I would not recommend it!”Desecration of INRI” and “The Descent” are pummeling cuts as well, the latter with a raucous screeching chorus of “HAIL SATAN!!” Classick.

Blood Chalice also released a full-length album back in 2017, and it is on my purchase list, as is the diehard 10″ version of this demo which comes with a plethora of bonus materials. Definitely stop by the HSP webshop and pick yourself up a copy as well if you share my insatiable thirst for such dark evil brews as this.

Closing Invocation:
Ritualistic explosions of hellish fury that will echo eternally through your skull. Buy and die!! (Terrorgasm)