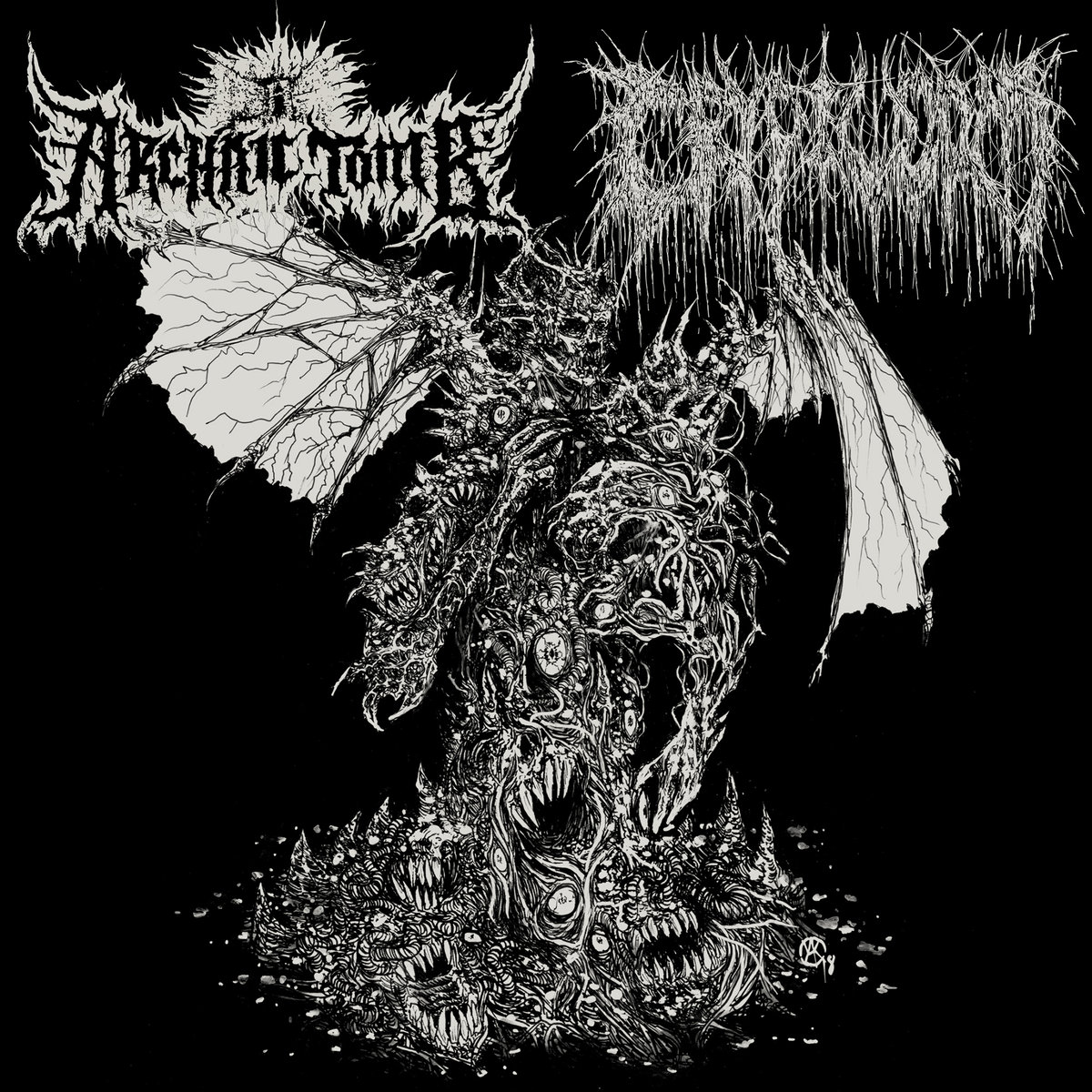 There is an old adage that states “You can not judge a book by its cover”.  I am calling bullshit on that in this particular circumstance. While acting contrarian on the simple merits of being a pain in the ass is fun and all, the aforementioned dictum holds no weight here.  The new Split 7” from Archaic Tomb and Cryptworm comes ensconced within a gorgeously repugnant outer sleeve clearly representative of its internal contents. Shrouded in darkness, a festering demon manifested by the fetid, dysmorphic remains of other infernal forms serves as a harbinger of death, doom and filth.

Archaic Tomb’s “Persecution Paraphrenalia” gouges the very bedrock of Death-Doom made by Rippikoulu and the like.  Production and vocals are not overbearingly cavernous. Mid-paced, seething and churning rhythm in conjunction with subdued moderate pace tremolo guitar work will drag one into the abyss. Respite is felt in the form of brief dirges as they crawl through the bowels of the earth commanding the obsequious darkness to their comfortless delights. Tasteful and fitting whammy-bar laden leadwork is kept infernal, with clear attention given to avoid producing any light.

Crytpworm’s “Putrefactive Regurgitation” stomps into the abyss with the business end of a septic truck hose and seem as if their plan to deal with the darkened pit is to simply fill it with rancid shit.  It is a stomach-churning five and a half minutes filled with blasting, primitive, stomping riffs and low gurgling vocals. The blokes from Bristol, UK seem as if they would fit in nicely with Undergang or any of their nauseating Killtown brethren.

Blood Harvest has done a great job, yet again, of delivering the complete package and I can not wait to hear more from both bands.  I am also grateful to have the perfect 7” to take with me on the go for my 11 minute and thirty second “cave-shit” adventures. As there is no cellphone signal deep below the earth, I can put the split EP in my portable vinyl player, and adequately capture the emotive vibes of the goings on.  From the dark, chilled walk in while listening to the Archaic Tomb side…….. to the spraying fecal matter everywhere, flipping the wax over and then trekking out covered in my own shit to Cryptworm. (Chris Topher MC)