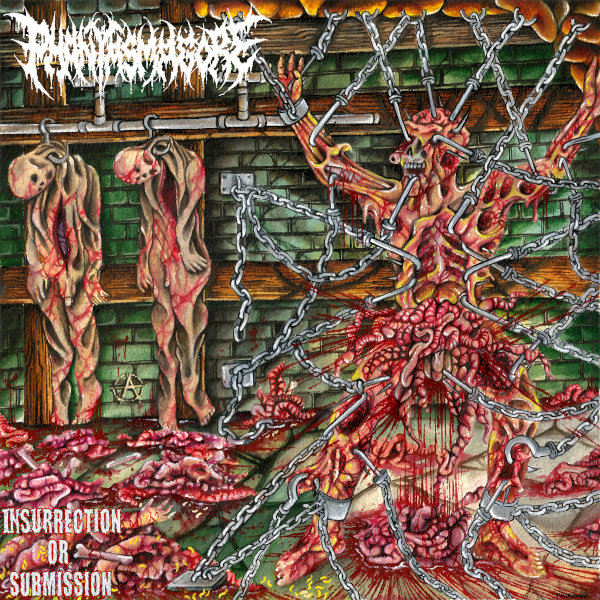 Translating to “phantasmagoria”, the term refers to nonstop “dreamlike” sequences either real or imaginary, which is fitting to Chilean duo & their EP “Insurrection or Submission”. Why? You think it’s a predictable OSDM sound, then blindsighted you to reveal arbitrary accents of Doom, Death, Brutal, & Grind undertones, a unique touch to make each track stand on its own instead of a monotonous generic timbre that becomes dull.

Big step up in overall quality from their previous 2019 “Abominations…” demo, songwriting has improved & growth in their developing eclectic sound.

Cover art by super sweet Rahma Putri, band’s IG states concept is “based on feeling of being imprisoned in a system that manages to torture & keep the minds living in permanent slumber…” accurate gorey representation with Autopsy references from “Severed Survival” & color scheme familiar to “Mental Funeral”.

Unmerciful opener “Overwhelming Recognition”, Charles Dexter Ward’s drumming takes center stage along with unforgiving, gut churning, sordid vocals to give a glimpse of what’s to come out of this violent drive. “Drips Echoes Through The Chasm”, changes pace, gradually builds intensity from their somberly drawn out intro to an untamed dissonant adventure from the guitar work alone by Rod Torrance & that catchy bass solo by session bassist, Beto, to give more depth that’s essential for their music.

Blood and sweat was poured into this and it shows! Well done. (Tori Belle)