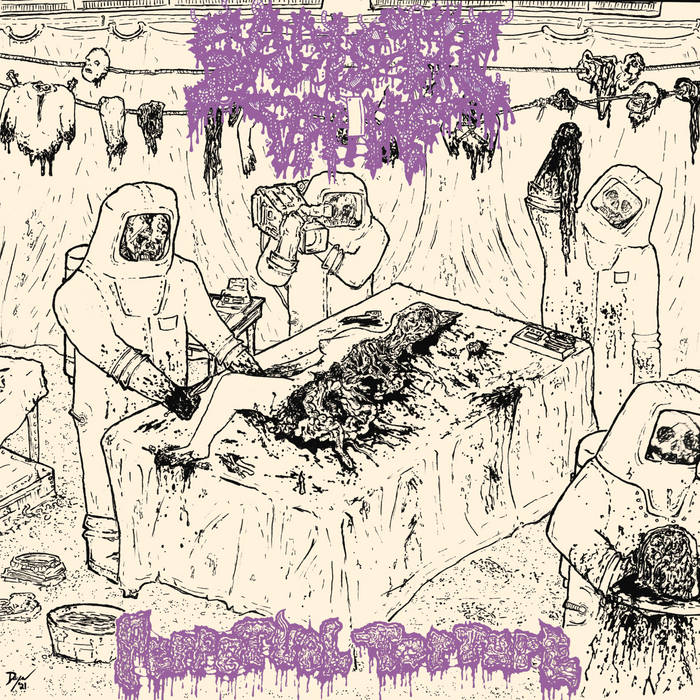 Anyone who has heard Sadistic Drive’s 2018 ‘Street Cannibal Gluttony’ demo/EP and then also 2020’s first album, ‘Anthropophagy’, has already noticed a certain style shift. Whereas the first recordings were still pretty Old School and at the same wild and creative. Comparisons to both Morbus Chron, Demilich, Autopsy and Impetigo being appropriate, that already seemed a lot less the case on the debut album. On ‘Anthropophagy’ it was mainly the unorthodox song structures and technical antics that remained. That makes the listener curious what to expect from this new full-length album.

Introduced by the opening sample from the 1989 Jean-Claude van Damme cyberpunk movie ‘Cyborg’. That film begins with a view of the world in utter decay that went first through anarchy then genocide and finally starvation. But a small group of scientists make a toe frantic attempt to save the world from a plague called ‘the living death’. In the specific sample, we hear the words familiar in B-movie circles “I like the death! I like the misery! I like this world”.

Together with those mortuary slashing sessions on the cover, we already get a good impression of the musical direction Sadistic Drive has chosen with this second album. Because once again we are dealing with a musical turnaround. The technical slant of the music is still unchanged, but the total organised chaos of the earlier compositions seems to have been tempered. Of the Impetigo and Autopsy influences, even less seems to remain now. What we get in return is a serving of Death Metal that sounds mostly very American, to Cannibal Corpse to be precise. We can make it even more specific, Chris Barnes-era Cannibal Corpse. The somewhat dark and subdued production gives it a dense atmosphere in which the short chopping and technical riffs come into their own. Also the hoarse barking vocals are quite typical for that early Cannibal Corpse sound. Although the band is also quite effective in this style and it will certainly please fans of Old School chopping Death Metal, the band does seem to sacrifice some of its own identity with this approach. Whether that’s a bad thing? That depends on the listener’s perception and expectations. (FelixS)