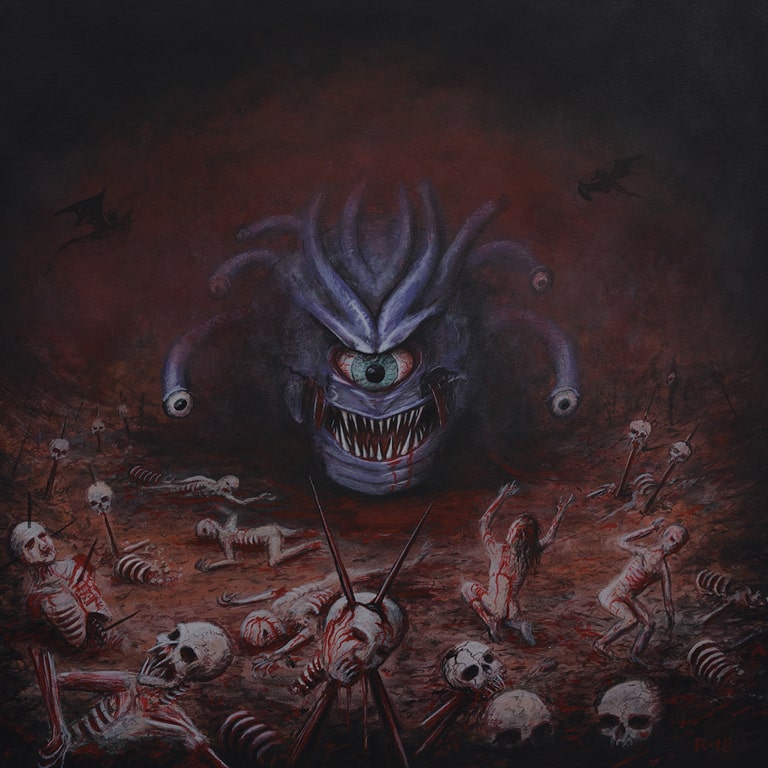 The Underdark.  Home to a ceaseless inhabitation of repugnant and malevolent creatures.  Vile beings bent on darkness, subjugation and bloodshed. Pleasured by ravaging, pillaging and feasting on the flesh of surface dwellers.  Deep in the recesses of this dark hell reside reviled, giant levitating orbs, Beholders. With a gaping maw and razor teeth built for atrocity.  An enlarged central eye to paralyze and control its victims. Possessing multiple, tentacle-like appendages, each equipped with an eye harnessing the individual ability to charm, induce fear, levitate, lacerate, incinterate, freeze or cause painful necrotization of the flesh.  Myriad tools of extermination, beset on all who encounter the abominable Xenophobes.

Akin to the way a Beholder utilizes the diversity of its sinister abilities for advantage, Xantam is a multifaceted conglomeration of multitudinous aural contrivances to accomplish a vision.  A vision congruent with the album artwork depicting the heinous nature of the Beholder. The Death Metal on Xantam’s Altered State is ethereal and blackened. It is at the same time astral and subterranean;  Melodic at times with empyreal keyboard synth motifs interspersed throughout the recording.

Xantam is the creation of a single person, Xantam the Beholder (how apropos). Successful composition of such a cohesive record clearly benefited from the lack of immediate outside suggestion and opposing compositional ideas.  Xantam the Beholder notes being “inspired by bands like Zyklon, Molested, The Chasm, Damnation, Azarath, Morbid Angel, and Limbonic Art.” With a list of influences of that caliber, it seems as if it would be impossible to fail, and his work has not gone unnoticed by the venerable Blood Harvest Records.

There is a fantastic diversity in song construction without being too progressive and remaining true to what appears to be a very clear vision.  Xantam has melded other-worldly synths, relentless drumming, interplay between atmospheric, melodic tones with weighty power chords as well as tremolo marinated guitar sections to create interweaving, fluid passages.  This, in conjunction with the combination of death growls and higher pitched screams, create an aura of a savage, interplanar subterrestrial saga.

The title track “Altered State” is very fluid and delivered in a way so that the perceived run-time belies the actual 9 minute composition.  It begins cloaked with a mystifying, moody synth segment that deftly escorts the primary instrumentation to the forefront. There is oscillation between temporary melodic reprieve and assaulting attack of blackened tremolo guitar and double bass.  All of this is completed while maintaining a somewhat abstruse and arcane feel.

Even though I do not feel this is necessarily similar in sound to the legendary Timeghoul, there are qualities that make me ponder Xantam residing in the same sonic realm;  Albeit in the dark subterrestrial portion. This feeling is particularly strong both midway and at the end of “Pseudogods”. The percussive onslaught is temporarily put on hold for some telestic choral chanting and reverb laden, clean, ringing arpeggiated guitar notes ovelaying doom-speed drums and power chords.  The return to attack is spectacularly done and perfectly timed. I was thrilled that the motif was again utilized as an outro on the track as it was my favorite component of the album. I sincerely hope to see more of that utilized on the next recording.

“Altered State” shows tremendous growth from the 2015 demo “LifeDeathBeyond” with regards to production and sound.  There will be a number of individuals, myself included, who definitely prefer the sound of the first recording; Yet, “Altered State” seems to be the culmination of a concept and sits firmly ensconced in the more esoteric and creative area of the underground.  (Chris Topher MC)