Coffin Rot – A Monument to the Dead 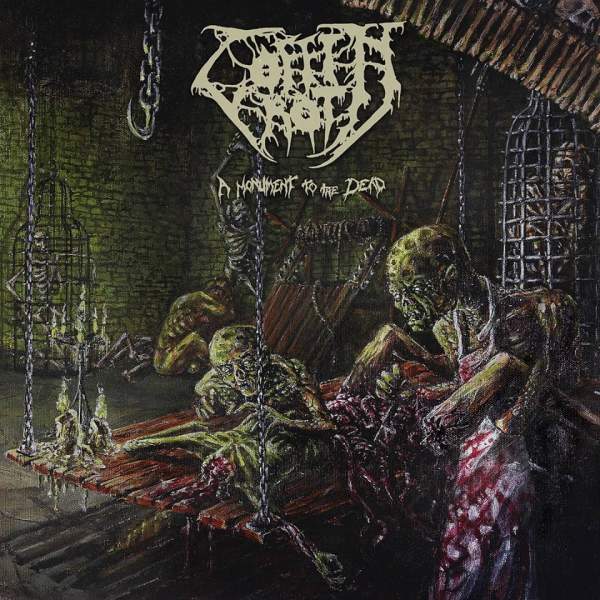 Hailing from the murky depths of Portland, Oregon comes something sinister, heavy, and down right one of the best Death Metal bands to break onto the scene. That band being an old school Death Metal worshipping machine in Coffin Rot. Drawing influence from the obvious bands like Gutted, Cannibal Corpse, and Dismember these guys are more than a one trick pony giving us a plethora of absolutely head knocking riffs that’s bound to make you tie up your neighbor and torture them until they aplogize about the tree branch taking out your fence, “Isn’t that right Mike!!” Oh umm,  sorry. Back to the album.

These songs may seem a little familiar to you if you’re into this band at all. A full length that has some songs from past demos and what not. You’re immediately hit with the first riff of “Compremesis” a slow sludge filled build up straight up into what feels like a death metal Repulsion riff with Hayden Johnson carrying the torch on the vocals that sound like if Corpsegrinder was more dynamic.

Wading through the first song before you are hit with the second and one of those songs that were on past demos and such, “Saw Blade Suicide”. A banger track that has stood the test of time and feels fresh everytime I hear it. It sounds exactly as the name suggests. You’re getting ate up by the saw blade like riffs that bring your innards to a bloody pulp. No holds barred all the way through right up till the next song, “Miasma of Barbarity”. A thrash filled barbarian hitting you with everything they got. A whole minute long intro of some of the best riffs on the album.

At this point you consider, “Forced Self-Consumption” however as the riff plays out you just can’t stop jerking your head back and forth. This is one of the hardest hitting songs on the album here folks. An intro to wake the dead with 45 seconds of the best most catchy riffage you’ll hear this year. The reverb on the vocals give this such a dreaded halls feel you’d think they just stood in an echo filled hallway full of dead bodies to record them.

You’d think this being a Death Metal record that’s so fast sometimes that we’d be out of catchy fucking riffs. You’d be dead wrong and put in the, “Incubation of Madness”. Which is exactly where you are at this point. Another great intro riff that is as headbangable as they come straight into a thrashy death metal meat grinder as your ears getting eaten alive but in some unbelievable ways it actually feels good on ya.

Overall, this is a gem of 2019. Giving us all of the elements that we know and love in our death metal. Catchy riffs, dank vocals, and gnarly solos. One of the best albums this year and can’t wait to see what these guys are able to pull off in the future. Was I already familiar with the songs? Yes. Am I biased because I already loved these guys, yes. So do yourself a favor and just listen to it. If not you’re gonna be fucking up big time. Great band, and great album that I can’t suggest enough.