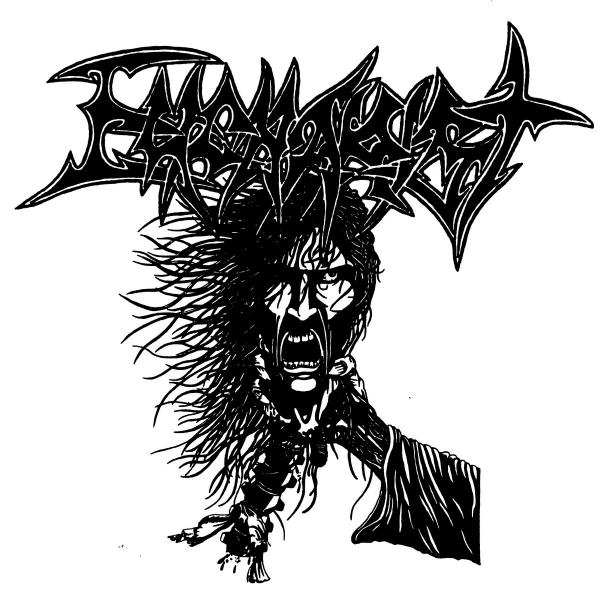 While some bands in the Swedish Death Metal scene seemed to be fighting for the title of who was the hardest, heaviest, nastiest, most vicious… Eucharist was already doing very different things. Eucharist was formed back in 1989 when most of the band members were around 14 years old. Apart from the band’s early trademark sound, about which more later, the band’s most distinctive feature was its line-up instability. Over the band’s entire career, they broke up four times. The one time the break lasted a little longer than the other time, but after each break the band got a new start. That instability did, among others, cause Daniel Erlandsson to seek refuge elsewhere, he then found shelter with Arch Enemy, Liers In Wait and also briefly with In Flames.

Musically, however, Eucharist really did have a lot to offer. The band was one of the first to combine Death Metal with so much melody. In 1992, the band recorded ‘Demo 1’, which was very well received by fellow bands from the Swedish scene, but that could not prevent another break-up. It took another while for the band to get back together: in 1993 the Wrong Again label was able to persuade them to rise from the ashes once again and record a debut album. This would be released later that year under the title ‘A Velvet Creation’. In the meantime, Italy’s Obscure Plasma Records had released two songs from the now quite legendary demo on a 7″ EP. Incidentally, Markus Johnsson, the only surviving original band member, told Voices From The Darkside in an interview that Obscure Plasma Records released this without his/their knowledge or consent and he himself only saw that 7″ EP for the first time at a concert in Rotterdam when a fan asked him to autograph it. He never owned a copy himself until many years later.

The band’s status mainly stems from that 1992 demo and the 7″ EP on Obscure Plasma Records. In doing so, Eucharist effectively launched a whole new movement within the (Swedish) Death Metal scene. It can never be fully proven who exactly started something first, but the general assumption is that Eucharist was at the cradle of Gothenburg’s Melodic Death Metal with their formation in 1989. Many bands would follow their steps and further develop the style. It is partly thanks to Eucharist that we have been able to enjoy bands like Dark Tranquility, In Flames and many others.

On this compilation CD/cassette tape (a vinyl version is still in the making), we find this influential demo with the addition of some rehearsal recordings and a studio track from the great Deaf Metal compilation CD from 1993. Compared to today’s standards, the songs may not sound very special, but measured against the zeitgeist, this was pretty revolutionary. The sound is quite reasonable and has a good deep bass that makes the typical Swedish guitar sound stand out. As far as I have been able to find out, the sound has not been tinkered with (too much), I don’t have the original demo to compare it with, but compared to the 7″ EP, I don’t hear any particular differences. With that, on this compilation you get the honest and raw versions of the songs that later also appeared on ‘A Velvet Creation’. As a ‘bonus’ you get some even rawer sounding rehearsal recordings, most of them are from 1992 but the last song, ‘Brutally Deceased’, is from 1989, making it one of the earliest ever Eucharist recordings. Listening back to all these tracks and also a quick revisit to ‘A Velvet Creation’ I think it is also fair to conclude that despite the bands’ great and undisputable influence, Markus never has been a really great singer. But, please, don’t let that spoil all the fun.

On the debut, ‘A Velvet Creation’, the band sounds a bit thin-skinned and the music seems to have materialized only partially successful. It wasn’t until 1997’s fantastic ‘Mirrorworlds’, and yet another reunion later, that the band actually sounded at its best – including Markus’ vocals, which do sound way above average on this record. However, the band themselves were never able to reap the benefits of their pioneering work. Even with their most recent album, ‘I Am The Void’ (2022, Helter Skelter Records), a breakthrough to a somewhat wider audience seems out of the question. ‘The Demo Years 1989 – 1992’, however, gives a nice glimpse into this band’s earliest strides and it provides plenty of fodder for all sorts of ‘what if’-thoughts. Well, what if the band had kept a stable line-up and had more label support… what then?