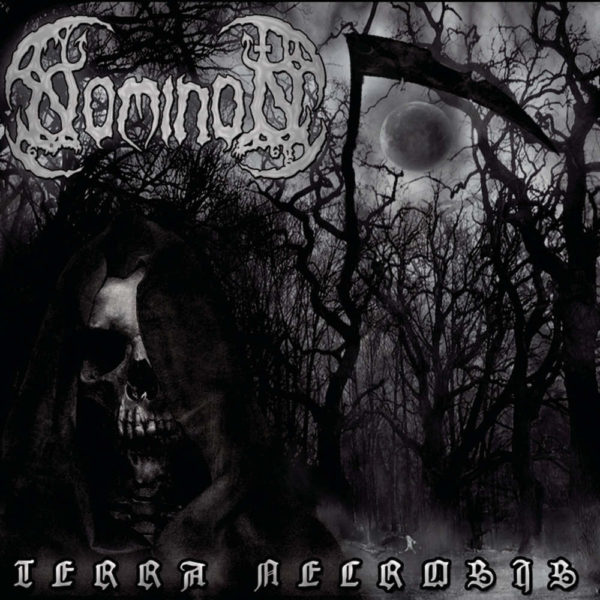 The previous two releases of the Swedish death maniacs Nominon (“The True Face of Death” MCD and “Recremation”) are still frequently turning round on my turntable. Their interpretation of how to play Swedish death metal is close to perfection, but that is just my personal opinion. And with their new album “Terra Necrosis” they keep the flame of true Swedish death metal burning in this age of all sorts of hybrid metal shit.

This album starts with “Release In Death” that has some killer guitar riff and as soon as the speed is added Swedish death is all around. But as soon as the second track “Arcanŭm” begins “Release In Death” is forgotten since this track is the ultimate Nominon track. It contains speed, brutality, catchiness and above all darkness. It becomes clear that the band has somehow changed their style into a darker sound with some lesser typical death metal influences and even added some old underground “blackened” thrash influences in the guitar riffs. One of the best tracks on this album is “Labŭla Rasa”, since this contains one of the best breaks I heard and the harmony of it, is putting it to a higher level of ultimate death. With the “The Internal Voyage” there comes an end to a 43-minute trip of nothing but Swedish death metal with a sincere darkness edge.

For a third album “Terra Necrosis” is just one hell of an album and puts Nominon definitely on the map as the true keepers of Swedish death metal. One of the best efforts the band has made on this album is that they have put a lot of darkness in their music and some lesser fast parts. Compared with their previous releases, it sounds somehow differently and at the same time it is recognizable as Nominon. It took several listening sessions before I understood what the band has done on this album and it is all in the album title: Terra Necrosis.