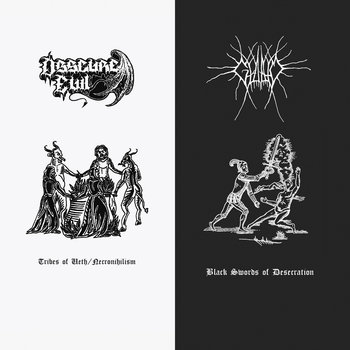 Just before the summer of 2018 both Gloam (America) and Obscure Evil (Peru) joined forces to create a split album. Let’s start off with Gloam: a blend of black metal, some old school death metal (the blast beats drives my statement) and doom is what they provide. After the distorted opening, this track jumps between fast-paced metal and mid-paced doomy parts, and especially the bass-lines get thumbs up, because normally seen the bass player doesn’t get such big part in the mix. But I guess they flipped coins, cause the vocals aren’t that audible very well in comparison with the bass. After listening to this track, I get the point, cause the vocals dare to sound bit monotonous after several listening. This track by the way ends with an outro that should be shorter imo.

Obscure Evil recorded two tracks and they provide the listeners a mix of black and thrash metal, but thrash in the evil and fast way. Some black metal is involved for me, but mainly the vocals lead me to that direction. The vocals aren’t my cup of  tea, but instrumentally they got me…track ‘Tribes of Ueth’ starts off with some oriental-inspired intro, but suddenly changes into one energetic eruption. And as said: its straight-forward these guys jump into this split. Track ‘Necronihilism’ is somewhat more subdued, but after a while they again put in that beloved aggression. The contrary riffs are a lust for the ear, but unfortunately that’s the last thing you’ll hear from these guys as they’ve split up recently. Go out with a bang, but then literally.