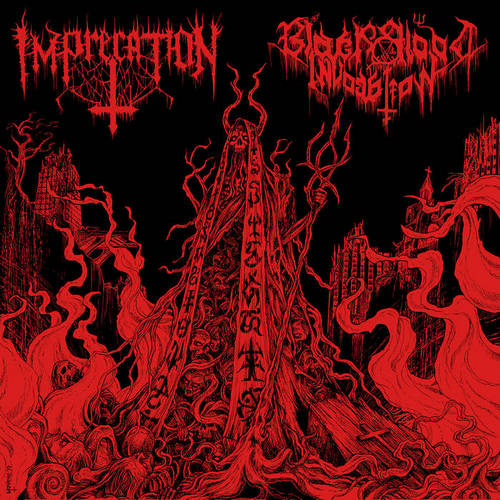 AAAAARRRRRGGGHHHH. 2 sick bands spreading black plagues over mankind. Imprecation? Haven`t they released an album in spring this year? Fuck yes, and I was more than excited to hear that there will be a split with the crazy maniacs in Black Blood Invocation expecting nothing than darkness and brutality and yes, you guessed it, both delivered some fantastic dark tunes again.

Imprecation not only started where they left with “Damnatio ad Bestias“ but increased in brutality (those riffs and blasts) and claustrophobic atmosphere…Lovecraft would be proud. In certain moments you can hear old Morbid Angel again, some Nile-like doomy sections and that classy haunting keyboard Imprecation know how to use for a proper dark Death/Black metal tune. If you think that`s all, wait for the war metal link at the end of “Emperor of Infernal Spirits”, pure crushing malevolence…an Infester like feeling here, brilliant as well. An instrumental in the pure nineties vein closes their part. Fukken A.

Greek fellow warheads Black Blood Invocation delivered a sick EP in 2017. Do you think they can be on pair with Imprecation in quality? Of course they do. Imprecation concluded with an instrumental and Black Blood Invocation started with one, like exchanging the torch, so that the flame will go further into the darker regions of the planet. It`s almost like a twin brother of Imprecation, means dark Black/Death with the entire range of speed and atmosphere, technical abilities and the gentle use of keyboards to increase nightmarish dreams. The vocals are somewhere between a deeper whispering (Beherit style) and some bestial Archgoat grunt. The songs are fucking heavy, also thanks to THAT basstone. The earth is shaking. Those uptempo beats paired with those tremolo picked chords and vocal lines are like Black Witchery but somehow darker, more obscure…phenomenal (did I mention THAT bass?). If you think you heard enough Revenge lately, well then make sure to stick to these guys. The last track starts with such heaviness, Cannibal Corpse couldn`t have it done better. Fukken A too.

This is the reason why I like splits sometimes more than albums. Killer bands delivering sick tunes that leave you craving for more. Must have…at least for me! (DPF)