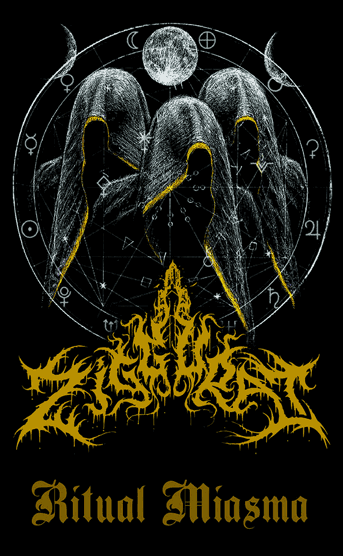 I saw the information about this release on the Caligari Records page and thought to give it a listen since I didn`t know a thing about this band.  This duo from Israel formed Ziggurat in 2015 and “Ritual Miasma” is their first release. The first thing that captured me was the production and hyper fast drumming by the recruited, well known Menthor (Lvcifyre, Nightbringer, Enthroned..) which is phenomenal in its own way. The rest doesn`t stand far behind. Deep grunting vocals summoning ancient Sumerian wisdom, guitars and bass reminiscent from Behemoth, Belphegor and some slight Nile influences here and there (mid-eastern scales and the likes). In terms of atmosphere the slower sections could have been from bands like Grave Miasma or countryfellas Sonne Adam. Towards the end there is even an outstanding moment in a chorus which makes this EP stand out more. This band is surely one to follow, big things to come (or at least there is the potential). (DPF)