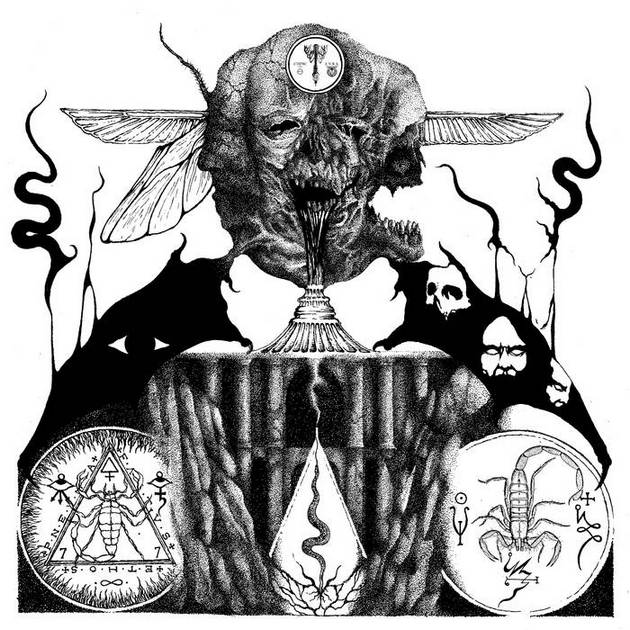 Hidden deep within the recesses of the human soul, there lies a place of utmost darkness.  A locus of abominable, merciless, ritualistic perversion extinguished in most through compulsory benevolent teachings.  It is primitive…barbaric…maleficent. A drive to exert dominance and inflict pain; Possessed by an infatuation of the macabre worship of death.  The vast majority suppress these odious, hateful compulsions to the point of elimination altogether; Basking in the light of life, free from the constraints of this wretched disfigurement.  Yet, there are still others who harness this deviant motivation…and unleash unmitigated wrath upon the world.

Caracas Venezuela’s Raw Blackened Death-Doom monstrosity Cthonica have channeled the aforementioned baneful sentiments into vile, savage, scathing sonic form.  The album is intended to be representative of man’s descent into spiritual decay and the result is the auditory consummation of this desire.  The band’s vision statement declares “To submit to the darkness of unreasoning and to be servants of our unconscious, metaphorically and symbolically speaking and to return to earth, and thus, now in the home of the Chthonic gods”.

Cthonica have beautifully melded the cavernous and dismal Death Metal backbone of Incantation with the sinister aggression and mauling veracity of Blasphemy and Beherit.  Incorporating the chaos of Portal while retaining such a raw expression of feral malice and pure fury to avoid the perception of being a sideshow spectacle. Typhomanteia: Sacred Triarchy of Spiritual Putrefaction will certainly appeal to fans of apocalyptic bands such as Of Feather and Bone, Infernal Coil, Triumvir Foul and Mylingar.

The album as a whole is extremely cohesive and its greatest strength lies in creating a consistent and believable atmosphere that is at the same time malignant, powerful and terror inducing.  There is a very specific sonic zone – furious, abyssal and catastrophic- in which the band reside, from which there is rarely a reprieve. The songs are equally bestial and oppressive; Sepulchral and scalding at the same time.

“Act I: The Chalice”, is a harbinger of the vehement, hellish sound that extends throughout the record.  The compositions are commensurate with the theme. One witnesses the progression from acceptance of sin, to further travel down the path of stygian darkness and ultimately beholds a champion of Acherontic teachings.  The tracks progress in intensity and give the listener a sense of incarceration in a truly terrifying, abyssal dungeon. Captive, compelled to experience malevolent physical and aural atrocities. Baptized in the black blood of a sulphurous master. A captivating and awe-inspiring nightmare.

The slightly cavernous production benefits the atmosphere without removing the listener from the immediacy of the album or hiding the instrumental contributions.  While the guitar and bass tone is very pleasing and the drums are aggressive and consistent, no individual instrument stands out dramatically at any point. This is without question a positive aspect of the album as everything sounds perfectly balanced and purposefully committed to creating a unified vision without any individual egoistic approach to composition taken.  The vocals are savage with frequent use of dual vocal attack; Both bilious, guttural secretions and poisonous, high pitched occult invectives.

Cthonica have melded influences from a wide, noxious palette and blessed us with an infernal gift of spiritual putrefaction. Bathe in the gushing volcanic effluence of Typhon and bask in the incalescent Leviathanic breath as you submit to the blackened earth.  (Chris Topher MC)