Impugner – Advent of the Wretched 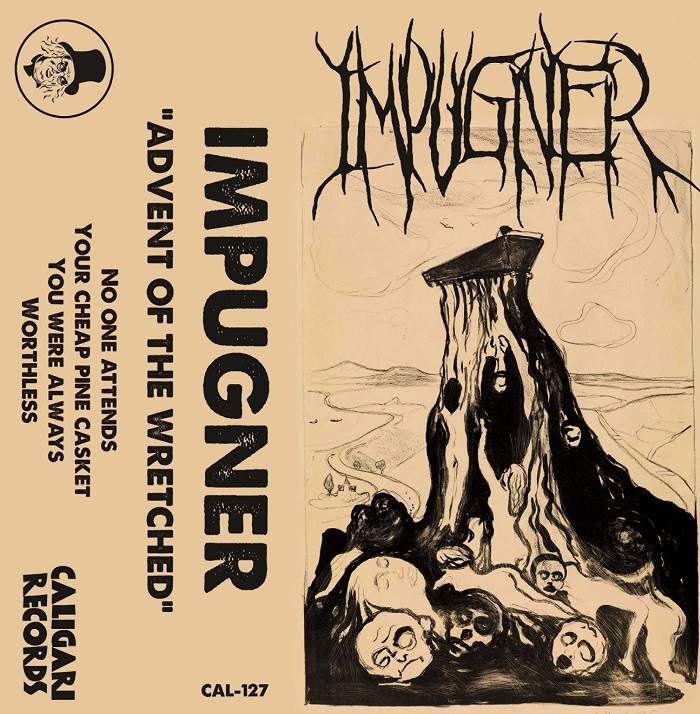 Featuring members of Lobotomized, Deathhammer and Brainshock amongst others, Norwegian Death Metal quintet are a hearty group of seasoned Extreme Metal pros whose debut album ‘Advent of the Wretched’ comes a full eight years after the bands inceptions and has been released on CD by Sentient Ruin Laboratories and on cassette by US label Caligari Records. The Oslo bands debut also comes wrapped in some stellar looking old school artwork. Despite a November 2022 release date, the album was actually recorded and mixed between November 2020 and August 2021, whilst the mastered was done by Dead Air Studios.

The album itself is a thoroughbred slab of late 80’s Death Metal, which to my ear has a distinctly South American flavour for the most part but overall just sounds like a gnarly piece of Extreme Metal from the demo years. In fact if you listened to ‘Advent of the Wretched’ without any other information you would never know it was made this decade. Lets start the analysis with the vocals of Bjørnar, who joined the band in 2018. Raw would the best adjective to describe his style and as previously mentioned he has a filth caked inflection on his vocals that reminds me of a lot of early South American bands. That is until he hits his more spoken word parts; the lyrics may be in English but his Norwegian accent shines through.

I like that Impugner work so hard through their production to sound like a demo band, whilst banging out some proper dirty riffs and some incredible guitar solos. Both guitarists bounce off each other well and compliment each others style, as well as adding a layer of technical excellence whilst sounding severely old school and grimy. Where this album really comes into its own though is through the gritty pummelling bass play and the murky tones from the drums which really escalate and amplifies the late 80’s vibe.

‘Advent of the Wretched’ is a short and to the point slab of uncomplicated Death Metal whose strongest song for me is ‘Cerebral Avarice’, a slowed down brooding track that leads into an intricate instrumental piece to close. As a whole entity it feels like nothing is left to chance on this album and every care is taken to make this feel dirty, old school and brutal.