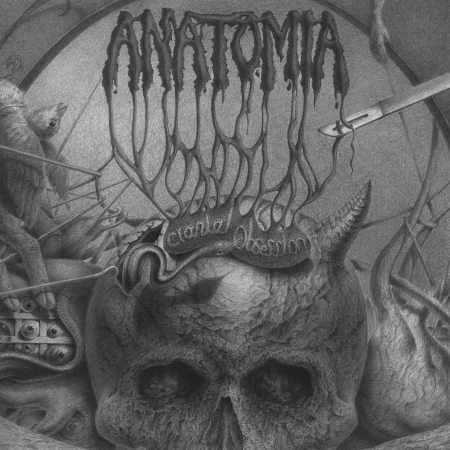 The Japanese horror commando strikes back. “Cranial Obsession” is their third album and probably their strongest in 15 years. The elements are frightening. Hellhammerish filth, Autopsy like doom sections and deep grunts, Finnish ugliness and all mixed in a Japanese way of perversion. Over an hour horror trip, including drones and organs…the eerie stuff. The speed varies from ultra doom to up tempo beats, the guitars range from slow chord progressions to tremolo picking and the vocals are morbid. As mentioned maybe a bit deeper version of Chris Reiffert. Some passages could have been written by country mates Coffins (another filthy death combo). The horror factor is higher than expected as Anatomia are able to write landscapes of dark proportions using just clean guitars, a slow drum beat and choir like funerary vocals laid upon. The album is plenty of groove and should appeal to all lovers of gory tales and slow mow bangers. A great album once again which solidifies their stand as one of the better bands in the genre. (DPF)