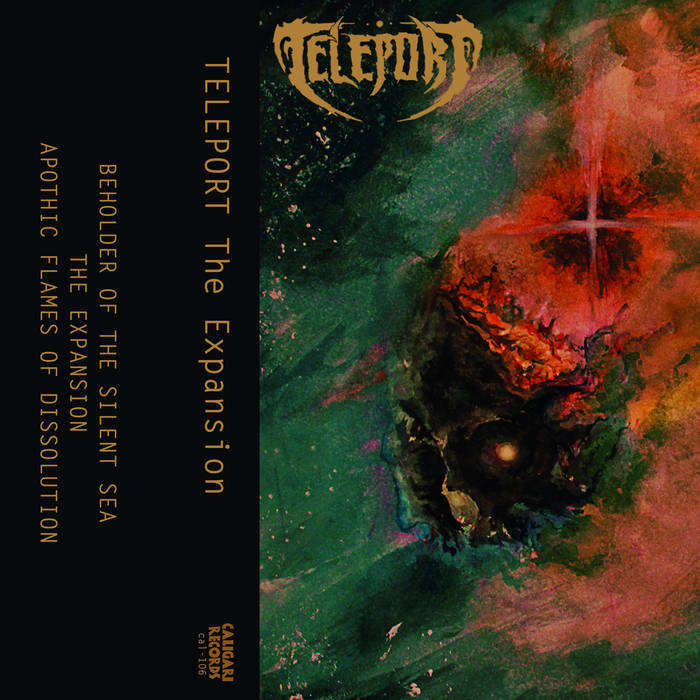 Cosmic dissonance ending in death. The fibers of reality streched thin. The warped sense of deprivation. The end is close. The end, is now. It’s these feelings I get listening to the fabulous new demo, “The Expansion” by the mighty Teleport. Blending all sorts of sub-genres from straight up Death metal going all the way to the other end of the spectrum to Black metal, and all  of the dissonant/Thrash in the middle.

You can feel the black hole opening up from the first track, “Beholder of the Silent Sea” that throws you into a blast beat frenzy of madness and it only gets tastier from there. With a great break in the song to show off the proficiency of the musicianship it’s self and then right back to neck breaking riffs with solos. Going to the conclusion of the demo, “Aphotic Flames of Dissolution” which has my favorite riffs from this, is a more slowed down evil sounding track from the slow intro going in and out through more groove based dissonant riffs. The drums on this song are absolutely stellar moving from blast beats to thrashing grooves with ease. The one thing that has always drawn me to extreme music is vocals and, “The Expansion” is no different. One of my favorite things on this demo is the vocals. Vocalist, Jan Medved gives me chills as his vocals are very unique and give this a great old school feel to it that just touches the nostalgia but also feels new and refreshing. Last but not least is the stunning artwork by, Fernando JFL (Giotefeli Anti Arte) which captures the essence of the sound Teleport is pulling off. Cosmic death.

If you like Blackend/Death with a bunch of great Thrash/dissonant filler in between then this is for you. Sitting right now this is my favorite demo this year. Everything about it rules. My only complaint is that it’s not longer clocking in at 20 minutes you’ll have this on repeat. (JonG)