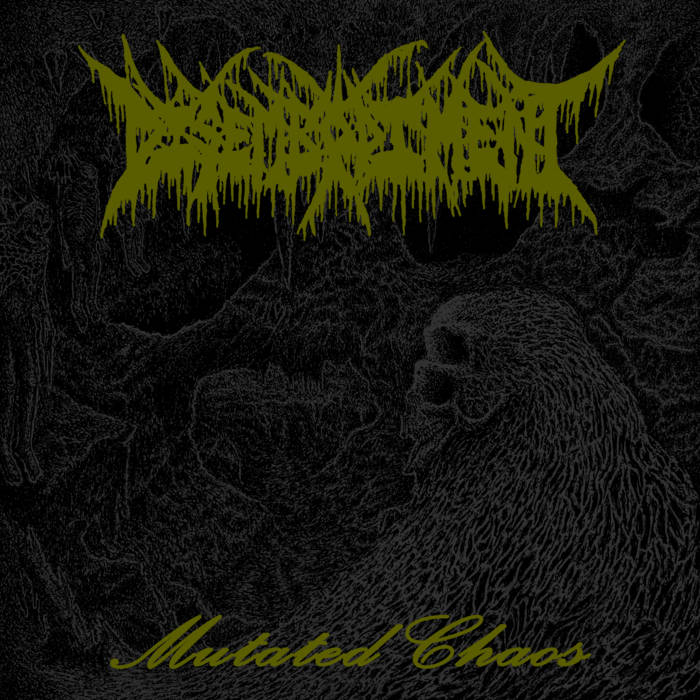 Originally, Disembodiment went by a different alias, but ended up shifting their sound by steering away from HM2, opting for a sordid mucky production and lyrical content altering from sacrilegious satanic worship to themes of trepidation, stupefaction & state of transitioning.

Being their first release under the new name, “Mutated Chaos” is short, sweet and to the point. Showcasing six tracks in a span of roughly over fourteen minutes, this quartet manifest repulsive ordure, spawning repugnantly audacious mid-tempo shifting at times dreary to instantaneous riffs enhanced with shuffle notes and the layering of vocals round this EP to be revoltingly pleasant.

Cover art by Rotten Species, really blended in illustration of charcoal/smokey grey in a cave like setting with a skull figure looking around its surroundings; wish this was brightened just a smidge to look into the detail. BUT going past the roughly forty second intro, you get into 2nd track, “Ceaseless Discharge”, notably recognize the differences among the vocal coatings, layering abysmal gruff gutturals, overlap with some eerily raucous uproars, and top with wailing shrieks, leaving you paralysed with fear. More groove based riffs credible on “Transcendent Upheaval of Unholy Graves”, mixed with some hardcore influence on percussion.

“Mephitic Gunk of Putrified Limbs” lyrics that describe the tonality of track, more emphasis using thick OSDM riffs and that putrid muculent outro sound leaves you feeling icky. Last tracks“Sickening Abominations Terrorizing At Night” & “Below The Mind of Morbidity” hone in more on the slow paced tempo, with closer being the longest of the bunch & least amount of lyrics. Do adore the adornments of grind along with slithering groovy bass notes that surface on occasion.