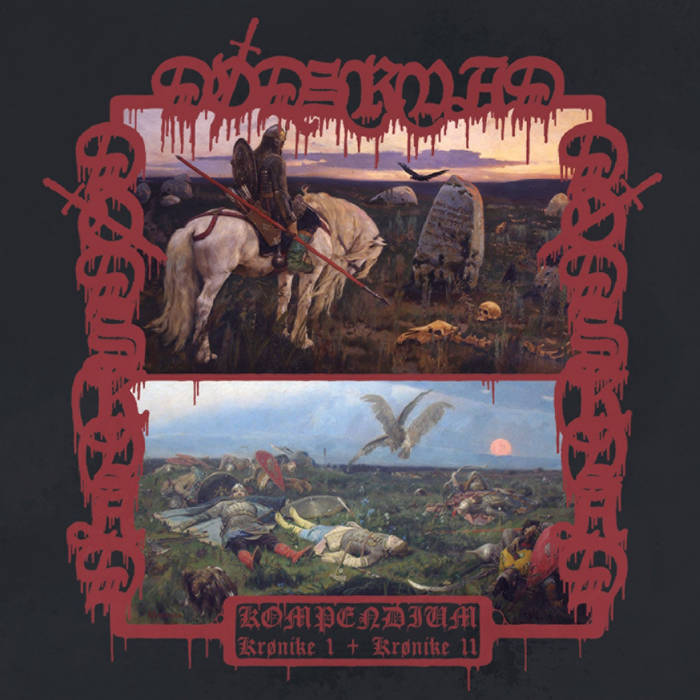 Mid 2022 saw a compilation album put out by Caligari Records that compiled the Krønike I & II EP releases by Norwegian Death Metal band Dødskvad on to one CD. Now, I won’t go into a great amount of detail in this review as we at VM Underground Fanzine have already covered both EP releases. It does at first glance seem like an unnecessary compilation though, seeing as Caligari Records released both of the original offerings. Scratch the surface a little more though and both EP’s were released on cassette, so I guess the label want to reach a wider audience with this CD compilation, so fair play to them.

Dødskvad or Death Poem in English perform brooding Death Metal with a slightly lo-fi sound, and they’re lyrical concepts focus on fantasy themes, Norse history and mythology.  On Krønike I the vocals sit quite deep in the mix giving them a catacomb dwelling air. In fact its the muffled drum tones and strong bass leads that sit high up in the mix, as well as the bands slow, thoughtful guitar leads. Indeed, at a slower pace the guitars have an engaging, cautious air to them, whilst at high speed they tend to thunder along whilst being accompanied by the odd wailing solo here and there. Dødskvad definitely excel at creating a murky, foreboding atmosphere but clear they also put a lot of emphasis on songcraft and each song goes through myriad peaks and lows as the pace surges forward and drops to a crawl quite often. From the first EP I really rate the work on ‘Adelråte’, a brutal track with some fascinating slower moments of crushing heaviness, a few short bursts of aggression and even a sneaky little bass solo for good measure.

If anything, the production on ‘Krønike II’ has even more murk and gloom around the production, and the bass sits even higher in the mix. You’d expect the band to have progressed their production on the second release but clearly they decided that the first EP wasn’t brooding and predatory enough, and they were right. this sounds far better. The vocals are far more deathly too; the growls sounding deeper and more carnivorous. Everything else is pretty much the same apart from a more frantic and mesmeric approach to their songcraft right from the off.

I seem to recall I said I wasn’t going to go into too much detail due to our previous reviews of this band, but this compilation really does get its hooks into you. From the initial low-key start this band builds a really solid sound and before you know it your fully invested in their meandering, bleak guitar melodies and crushing, sledgehammer like drumming patterns. I can see why Caligari Records have put this out as a CD compilation, because it deserves as many listeners as possible!