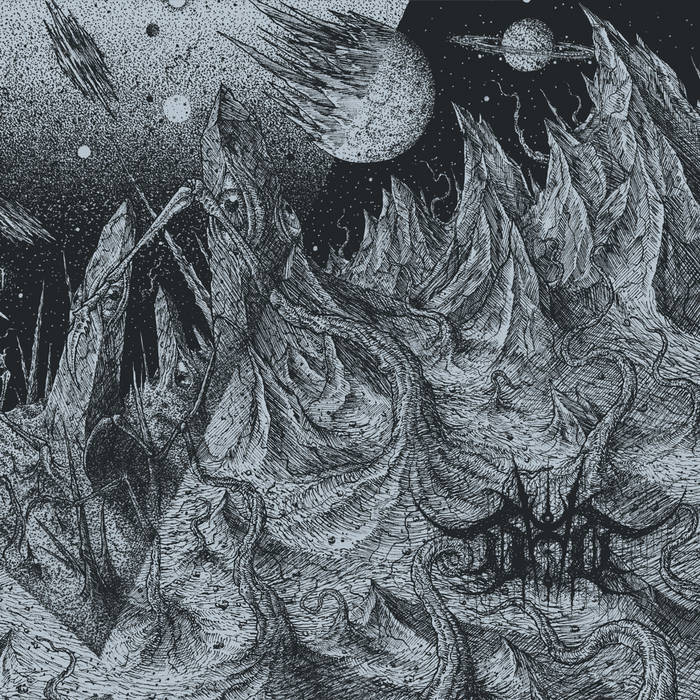 Interesting fact to begin this one with, although easily found if you look around the interwebs. The majority of Devoid of Thought used to be in a band called Warstorm. Thrash Metal was their leaning, and by christ didn’t they give it their all. Highly recommended listening, but best we focus on the matter at hand, that being the Italian Death Metal machine we know and love as Devoid of Thought and their first full length release “Outer World Graves.”

The leaning towards the filthy outer reaches of the very universe continues here just like on their 2019 demo “Cosmic Apoptosis,” and any semblance they may have once had to being a Thrash Band or even remotely human in any way shape or form has long gone. Like comparing a snail to a high speed rail network, there is no fucking point in all honesty apart from saying that IF these guys were snails, they would have been spewed forth from the maw of some otherworldly being that is all teeth and slime and armour plating (that has teeth on it.)

Yes, “Outer World Graves” brings to mind horrors unutterable in galaxies well beyond the ken of us mere mortals. Songs such as the relatively (for this album) short opener “Perennial Dream” take us on a ride majestic through spacial dimensions unknown, but like any good pilot worth a damn ease you into the turbulence before the real shit show commences.

Then the cosmos envelopes you, and “Four Cerulean Ways” digs right into the planetary mire and grinds itself into your consciousness at a slow and devastatingly heavy pace, and whatever the vocalist has manifested itself into sounds like it could wipe out entire planets with nothing more than a short recital of “Mary Had a Little Lamb,” with the emphasis on HAD, because this cunt ate it, and the world it resided on just for shits and giggles.

Track three “Effigies” does not stray far from this realm of demented hate, but contains short little burts of what one could only describe as insectoid like guitar passages, and brings to mind giant swarms of eight legged antennae wearing bastards swarming all over your packet of Space Food Sticks on Zebulon Prime just after the twin sun rise. Much brutality is on display my friends, and also a shit ton of heftiness. The sonic battering you will receive around the 6:30 mark makes concrete look like jello, such is its majesty.

“Sidereal Necrosis” brings a touch of Voivod along with it for good measure, and a finer type of thing one could not find. Still batshit heavy, but with a cracking pace and the kind of urgency that a dying star must feel in its final moments just before it begins its journey into becoming a black hole, and one doesn’t have to use much imagination to picture this as the music draws to the final dark curtain.

The closing track “Stargrave” belts along at what we could well name terminal velocity to begin with before descending into some nicely mid paced musical packages along the way to keep your journey smoother than running through an asteroid field after jumping out of warp speed, eventually slowing further and further to the point that the listener feels like the end is nigh, and it well is, for now. Devoid of Thought bring Death with a giant wallop of dread to us here, and although this may be a shorter release than many of us would have liked, it certainly IS one hell of a ride into the unknown reaches of terror and the beyond.