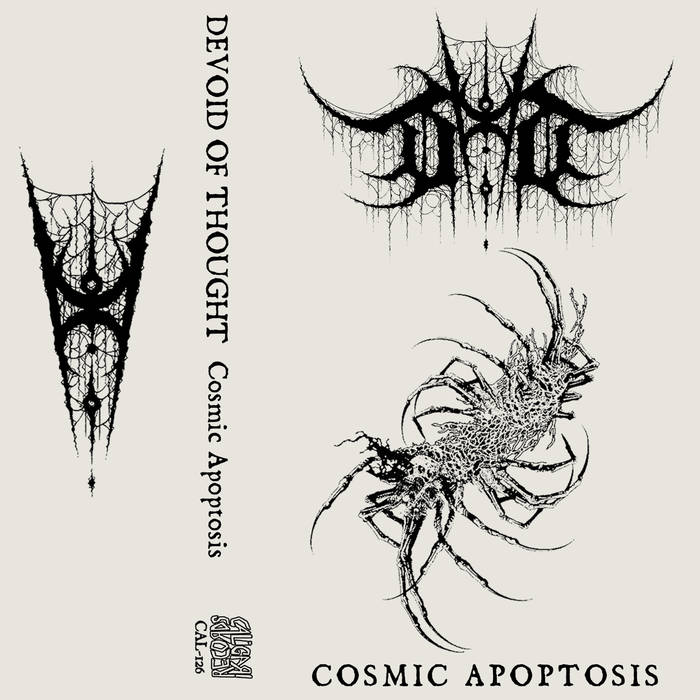 These guy’s started out as a Thrash band funnily enough, called ‘Warstorm’ but apparently after much fuckery with line up changes the two guitarists decided said fuck it, let’s form a Death Metal band instead. How do I know this? It’s called the internet, and it’s a wonderful thing sometimes ha-ha. Anyway, this may have been the best move they ever made, and after a demo release in 2017, a split in 2018, they have decided to smack us around the ears with another demo in this, the year of our Lord and fucking saviour 2019, titled “Astral Necrosis”, and that’s a very nasty title indeed, bringing to mind the slow decay of the entire universe. Does the music fit such a grand and ambitious monicker? Yes it does.

Space seems to be a bit of a thing these days in the Death Metal world, plenty of bands have stopped looking into the shitiness of this planet, and are casting their eyes out into the great unknown, and this in itself is a good thing. Flat earthers be fucked, and God botherers beware because it’s about time we realised that there is so much out there that we do not even begin to comprehend, and we may as well have some fucking fun with the idea anyway. For this I applaud any band that has the imagination to go where others may well have boldly gone before, and do it in style. “Devoid of Thought” bring the interstellar into your very own ears in a very Lo – Fi, Sci – Fi kind of way if that makes any sense. It may well be the copy that yours truly has, but it makes not a shit of difference anyway, because this is just class regardless.

Yep it is raw, and rough, and ready to kick your sorry arse. In no way are these Italian motherfuckers slouches when it comes to delivering the goods, far from it, The whole thing reeks of the pure intent to hand out a sound beating, and that’s precisely what they do. “Necronaut”, being the first track starts off almost doomy, one may think they are listening to something other than than Death Metal, and then it all goes batshit insane and you are treated to the kind of riffery that bends the ear, and the mind. This is not the Thrash that they once dished out under another name, this is almost Voivod after being assimilated by Elder God’s from a place we simply cannot comprehend.

Track two “Tomb Marauders Horde” begins like a lovely jaunt through the universe, one stares around in wonder, marvelling at the beauty all around, and then a star explodes, your ship is off course, and you are forced to scratch around in the dirt of a hostile planet to survive. The gigantic riffs that follow are the winds that push ceaselessly at you as you struggle to make some kind of sense of this all, and none shall you make. This is brutal, and you will die, and this will be the last thing that you hear as you scream for someone to care. The universe doesn’t, for you are insignificant, but at the very least you have been worthy of hearing the foul winds before you decay into nothing.

Last one “Stargrave” is an all out assault on the senses. No quarter is given, and none asked for. From the guttural belch that it starts with, to the final resounding notes, you will sit as a captive audience in awe. The mid section riffs are enough to destroy the mind, and each and every one of these God’s from another plane of existence is giving us a lesson, and that lesson is purely this. We are as old as time itself, and you WILL suffer under our wrath before we flick you aside as just another meaningless life form that we care not a shit about.

Yep this is the shit, and maybe my interpretation of it is way off, but fuck, this is my brain, and this one made me look up to the stars and wonder. (The Great Mackintosh)