Ritual Mass – Abhorred in the Eyes of God [EP] 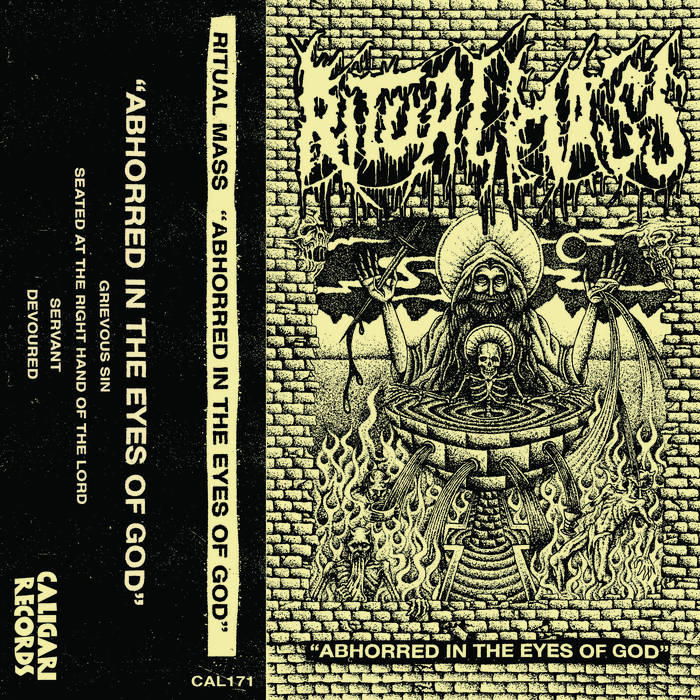 Ritual Mass, have been making their way through the Pittsburgh underground, and “Abhorred in the Eyes of God” is a monstrous display that demonstrates what they do and why they’re in the vein of deep-rooted extreme metal culture that flourished in the late ’90s, and late ’00s. Caligari Records, has always been revered as the house of many uncanny acts, and easy to understand why they came forth to treat this release in cassette format after the EP was released independently by the band during 2019. As, here Ritual Mass, creates an aural abyss through this deadly follow up, which sounds nothing but old school Death Metal – like a journey into the abyss of hatred, agony, and devourment.

The entry to this journey is quite majestic with a spear sharp guitar tone, yet low, yet doomed. And, the precise handling over the string sections is omnipresent throughout the 12 minutes and 27 seconds of length. Forewarned, when the deadly sludgy parts will throw you in the abyss; the shreddy parts will invoke madness by means of fear and darkness, and yet slow and steady transitions take you into the eons of emptiness.

Back and forth, this will keep hunting you with lethal grooves that create an environment of a mad ritual. The low section adds perfectly to this ritual creating a feeling of hollow and emptiness. This doomed yet sludgy bass tone adds a baneful void to the aural energy, this band creates. It feels like the sound was created within the caves, and the hollowness of the bass tone draws this picture in the mindset while listening to this creation.

The steady and straight percussive section deeply established their classic old school approach. It blends with the string sections in a heinous process and creates such a dark and cold environment that will attack you, grasp your soul, and leave you in the abyss hatred. The first song “Grievous Sin” represents the power of being on the left-hand paths and the beastly vocal parts make this song even more grievous and horrendous. Without any respite, “Seated at the Right Hand of the Lord”, will keep on attacking you and at the end, will expose the blindness and enslavement within you through an outro from the other worlds that belong to the darkness – as it made trails the next one “Servant”.

At the end of this release, the sound creates such an environment, that it feels like an ancient ritual of madness, in which you will be consumed and doomed. The percussive section defines the attack precisely thus creates the ritual in a slow and steady yet deadly manner. Most prominently guitars, bass, and drums all together create the sound. And when such happens, it becomes quite unnecessary to assert or discuss any specific section of a composition separately. In the beginning, the vocal section was delivered in a beastly way and with that, I expected a lot of more diversified vocal lines to represent the compositions, as with each second passing, the sound gets more intense, formidable, and ravening, and here, vocal lines could have been drawn in a more classic or old school way in my opinion. But this obviously does not mean that it does not go with other sections. In fact, in this release, they are quite in line with the string and percussive sections. And also, the repetitive motions of the vocal deliverance create an eon of void, which makes the sound even darker.

But, most significantly the sound-mixing of this release was done in a precise manner. Each composition of the EP has some dark parts, with slow and sludgy parts, and dreadfully fast shreddy parts. So, it must have been tough to mix these components. But on this duty, Mr. Greg Wilkilson, has chosen a masterful way of merging the components to create a uniform sound. He has done this part superbly, as this EP retained the classic old school Death Metal flavor, where the production is raw, yet every part is strong and clear. Overall, this EP of Rotten Mass reeks 100% Death Metal. It shows no mercy and can instantly grasp you towards its absolute aural madness. Embedded with the bizarre thought-provoking artwork by Keith Caves, which not only evoking outlandish visions but also encapsulated the total essence of this EP; altogether left no doubt that, “Abhorred in the Eyes of God” is obviously an important addition in the realm of true Death Metal. (Mordiggian)