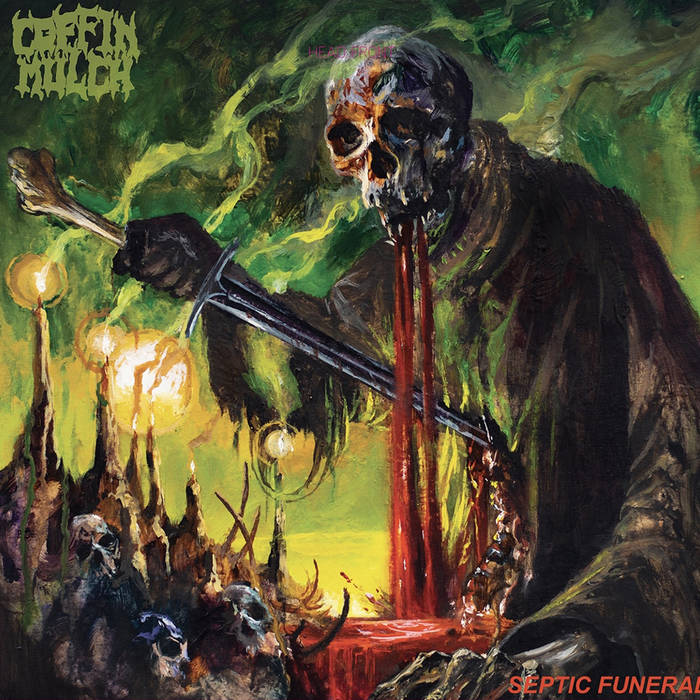 We all know the ol’ Death Metal adage: a great band name goes a long way. And that’s immediately what I thought to myself when I caught (foul) wind of Coffin Mulch and their debut EP, “Septic Funeral.” I mean, c’mon. Coffin Mulch?!? That name is sick! And if that isn’t enough of a selling point, then the album art by famed Nightjar Illustration will absolutely draw you in, which features a giant skeleton impaling itself with a sword while puking up blood. This one absolutely belongs on any metal collector’s record shelf. But let’s be honest. A great band name and skeletal/pukey album art is all fine and dandy, but how does the actual music sound?

Well, you can rest assured that the music sounds great. Coffin Mulch wear their influences on their sleeves, and a quick look at their Bandcamp page suggests that their music will pair well with fans of Autopsy, Dismember, Asphyx, etc. And while you can certainly hear the inspiration springing forth from these bands, Coffin Mulch fine-tune it just enough that it’s clearly their own beast. The buzzing guitars and pummeling drums create a mid-tempo death march that feels like a horde of wronged, shambling skeletons are slowly ascending up from their gravesites (which is best exemplified in the track, Onward to Death). It’s OSDM done right, and would fit snugly with bands like Gatecreeper, Fetid or Cerebral Rot.

Honestly, there’s not much more to say. “Septic Funeral” hits quick and hard and before you know it you’ll be hitting play again for another spin. It’s a rip-roaring EP that I’m already pushing on my friends to check out. We all know that it’s a great time to be a Death Metal fan right now and Coffin Mulch helps prove that there’s so much you can do with the OSDM sound. Here’s hoping that a proper full-length isn’t too far off. (Sam Cooper)