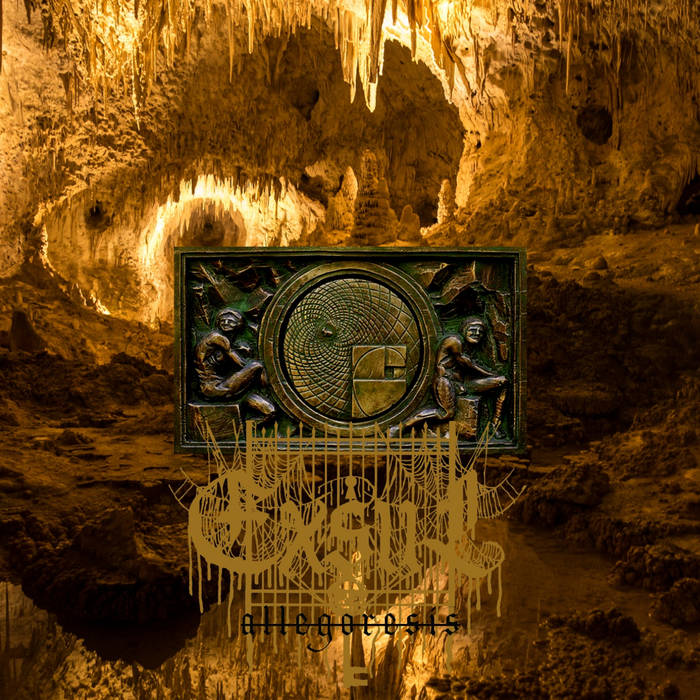 It didn’t take US Death Metal pairing of Phlegyas (Drums, Vocals) and Charon (Guitars, Bass, Vocals) to return following their debut self-titled EP. Known as Exsul, their sophomoric EP release entitled ‘Allegoresis’ was put out through Caligari Records on both CD and cassette. Now, the bands debut EP was a stone wall killer. powerful, foreboding and ruthlessly and uncompromisingly heavy! For this second EP, opening track ‘Noesis’ builds slowly before unleashing a volley of sledgehammer like riffs and cavernous drumming, whilst gurgling bass tones tap out their uneasy sound, and mucus drenched growls rise up once more from the depths. Unlike the first EP which was pretty methodical sounding, the first forays into this EP show a far more cataclysmic and chaotic sound, like the band have truly let loose.

Essentially this EP is a four track release, but with two instrumental interludes included. If I’m being honest, the first of these, entitled ‘Glaucon’s Dilemma’ adds little to the EP and in fact disrupts the momentum and flow. Arguably you could say that the momentum lost is never re-gained as ‘How in the Land of Satin We Saw Hearsay, Who Kept a School of Vouching’ clatters along its frenetic way, the cohesion of the release having been squandered. That said, the track does have some dark and sinister moments, but nothing to match the intensity of the first EP. That being said, some of the bowel churning vocal work on display here is certainly noteworthy. Then comes the second interlude, ‘Pantagruelion’, which again adds nothing, lacks intensity and is merely filler. I’m not sure what the guys were going for here but it simply doesn’t work.

Over the next two tracks things don’t really pick up, and that vital sense of songcraft that the band laced their first offering with simply vanishes. Yes the sound the band puts out is still punishingly heavy, and they continue to perform to a high level, but this EP is a real let down.