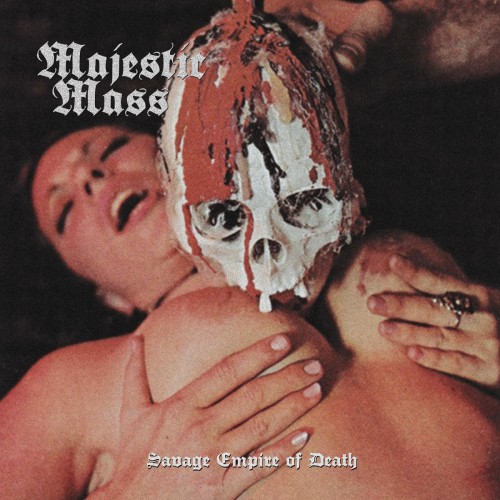 Five figures in black hooded robes enter the room and take up positions at the points around the blood red pentagram painted on the floor. They light candles and start chanting unholy spells, raising their voices from whispers into shouting. The room begins to shake and dust falls from the ceiling, as the candles are extinguished in a whoosh of wind and darkness. At the center of the pentagram the Majestic Mass has been summoned.

Savage Empire of Death is the debut album by Majestic Mass from Denmark. This one has a wide spectrum of musical waves flowing through it: heavy metal, black metal, psychedelic rock and doom metal. Usually when bands combine this many genres together the sound ends up feeling like a directionless hodge podge and it’s distracting to the listener, however Majestic Mass are able to keep this train from derailing and it’s all thanks to three things: 1. these songs are both catchy and melodic; 2. they are well written to keep the listeners attention, there is no repetition here, every track stands out and feels fresh; 3. There is an atmosphere throughout the entire recording that fits perfectly with the feel of the music.

At the heart of the sound there is early 90’s black metal that has been cleverly injected with streams of psychedelic synths, fist pumping heavy metal riffs and trad doom dirges. Throughout the album the songs range from fast tremolo picked riffing, slow gut churning hooks to mid-tempo booming. The guitar leads on the album are infectiously melodic and if you don’t catch yourself toe-tapping along to them, well you are probably dead inside. Now lets mention the vocals that are of the black metal screech and shout variety, which fit perfectly with the fuzzy and crude production of the album, you can even understand 80% of what is being sung, so that is a bonus. Lyrically the songs for me conjured scenes from 70’s/80’s British and Spanish cult horror movies, even the album cover could be a VHS cover from some forgotten hammer horror film.

I honestly think this is one of the best releases that came out in 2018 and my only complaint is that I wish it was three of four songs longer of an album. (Ted Gloom)