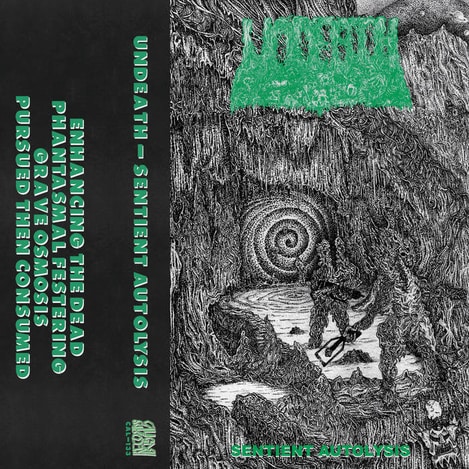 Well strike me down with a bolt of lightning if these guys didn’t drop one of the finest damn demo’s earlier this year, titled funnily enough “Demo ‘19”, Undeath delivered some of the finest shit these ears had heard in a long time. Such precise, perfect Death Metal, I was instantly enamoured, yes it was a true case of love at first riff, so fucking good. More I wanted. MORE! And they must have heard my prayers to the dark ones, they surely must have, because they decided to release another one now!

Okay, I’m just kidding, they didn’t do it just for me, the new one “Sentient Autolysis” pretty much picks up from the first release and then just continues to pummel you around the temples with the majestic finery that they have begun with. It’s tighter than a fishes arse, still retaining a similar sound set, and the two tied together would the perfect album make. I had the pleasure of reviewing the first one for another site, and my statement on that one still rings true, I do believe it was “Prepare To Shit Thy Pants” or some such nonsense.

Four songs weighing in at a total of sixteen odd minutes, about two seconds shorter than the first one which is my only drama with this. That two seconds could have been put to good use with another mind melting riff, but hey, let’s not call them lazy. Take your pick of the songs, each and every one as good as the other. From “Enhancing the Dead”, which is not about being nice to the recently deceased as much as we would like it to be, to “Pursued Then Consumed”, which IS about being chased down by the recently deceased and eaten like a warm sausage at a barbeque, these guys have nailed it once again. You want this, you need this, and holy fucking shit when these guys release a full length I may just bloody well join them poor deceased bastards, becasue this is so good you would die for it.

Undeath hey, what a fucking band. I salute them. So should you.  (The Great Mackintosh)