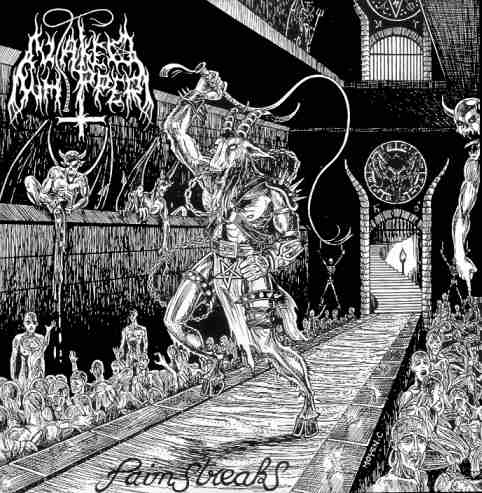 Once in a while Iron Bonehead Productions digs up something from the German underground, earlier we saw for example Ungod, Baxaxaxa, Moonblood and Fulgor. With that, it was waiting for the first official reissue of Naked Whipper material, in 2011 Deathrune Records already released the material once, but the band considers that as a bootleg. The fact that Naked Whipper is pure cult is proven by the astronomical amounts of money paid for the original releases. That is a second reason to re-release the material, but first of all it is of course because of the musical content: sado grind metal at its best.

Main-man and sole member Dominus A.S. (Alex Schulze) shows his nastiest side here, the term ‘sado grind metal’ exactly covers the bill. Low grinding guitars (reminiscent of the first Death Metal-era Napalm Death), war-like Black Metal drums and barking vocals makes this a perfect blend of Grindcore and Black Metal. Add a good helping of German perversity and you have songs like ‘Pagan Pussy Gore Intruder’, ‘Anal Queen’ and ‘Hyperincest’. No, it’s not all subtle – at all. But with a band name like that and an apt-Chris Moyen cover, it’s totally in line with expectations. This distasteful whole fits well in the zeitgeist, where Grindcore and Black Metal were still combined with more regularity than nowadays, it goes nicely hand in hand with for instance Blasphemy, Beherit and Impaled Nazarene, who celebrated their musical heydays in the same time. Nowadays, it is bands like Archgoat that still proudly pays homage to those days and sound.

The first part (on vinyl, side A) is the studio session and spreads 11 songs over some 20 minutes. The second part (B-side) is a live set, recorded in September 1994 in Mannheim, Germany. This is even a bit rawer, but this time, unlike the studio session, it is played with a real drummer. It’s nice to hear for a change, but it doesn’t add that much.