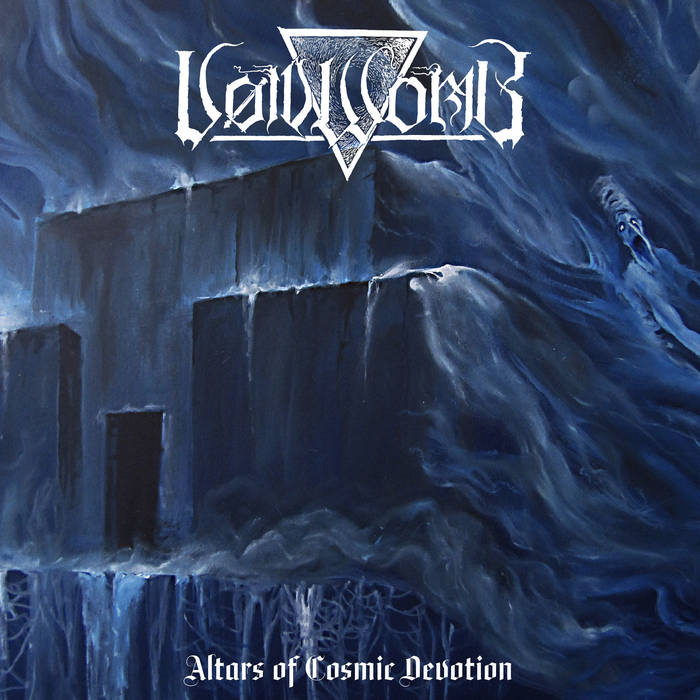 If a voice could summon forth a wraith from the mouth of a corpse ravaged by frost, it would be Voidwomb’s, debut EP,’Altars of Cosmic Devotion’. The EP presents itself with an amalgamation of elements drawn forth from the wells of Black, Death and Doom. Now before you ponder on what makes you this EP stands out as there are countless bands that fuse together different genres of extremities within their very being…what sets Voidwomb aside is the simplistic approach used towards the EP… and no it doesn’t mean that the bones of this EP is naked without tendons and flesh to cloak it’s structure.

The simplistic manner here is in terms of the slower doom like aspects, songs such as ‘Summon of Utu-Shamash’ and ‘Altars of Cosmic Devotion’ exemplifies this point as these slower timed injections into the tracks is what crafts the atmosphere and acts as the clay for the other variables within the tracks to craft. What is appreciated here is lack of over complexities to erect a facade of dissonance, instead the instruments uses the shifting tempo to conjure an elemental aura with the riffing that grants the illusion of fierce winds that would inflict waves of decimation. The guitars on the EP feel reminiscent of Morbid Angel’s ‘ Gateways to Annihilation’ where  it would ooze that ceremonial flavor as though the winds that are summoned are not that of nature but the air that which is exhaled from a diabolical being, ‘Architects of World demise’ showcases this description.

The voice that engulfs this EP feels like a titan whose lungs expels the cold that freezes the unborn within a womb and solidifies the blood with every word spewed forth. At times the delivery will match the tempo of the instrumental components, where all factors on the EP work synchronous with each other as though they are the cause and reactions from one unified body.

Overall this is a fantastic, succinct EP that proves that over intricate patterns aren’t always needed, yes the guitar  and percussion can have a serpentine movement to its playing where different shapes are formed, but it all feels organic. ‘Altars of Devotion’ can basically be summed up as an ancient being whose very essence has been transmuted into primordial sounds. (Justin Joseph)