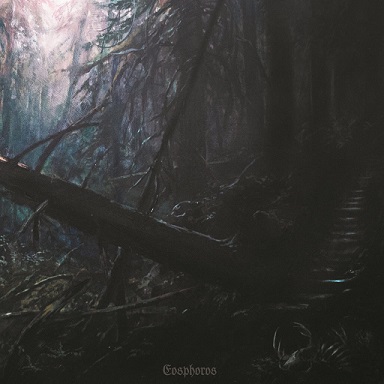 EOSPHOROS (Eosphorus) and HESPEROS (Hesperus) were the ancient gods of the star (aster planeta) Venus, initially regarded as two distinctive divinities—where the EOSPHOROS means “Dawn-Bringer”, was the god of the dawn-star, while the second HESPEROS means “Evening” was the star of dusk. In ancient Greek vase-painting relics Eosphoros-Hesperos was represented in a combined way and depicted as a youthful man either in the form of a bust surrounded by the shining orb of his star or as a winged god holding a torch and crowned with a shining aureole.

The gods of the dawn-star certainly made some pact and to carry forth the mysterious spirit Eosphoros, from Portland, Oregon proclaimed their formation in 2016. Certainly entering as a new form, Eosphoros congregate a wealth of familiarity in the flourishing Pacific Northwest underground, including the ex-members of Triumvir Foul, Shroud of the Heretic, and Shrine of the Serpent. The accumulation of the newly bonded souls made vibrations and prestigious Iron Bonehead Productions made accord to release Eosphoros prominent self titled debut album, “Eosphoros” on CD and vinyl LP formats.

Comprising six epic length songs in an engrossing 46 minutes, Eosphoros sets the soul side journey which wanderers through the realms and transcends darkness and mystery; thus leads the pathway of experiencing spirituality to the aesthetics through dreadfulness and decay collides with magnificence and tranquility. From the fiery and merciless beginning – “Promethean Fire,” towards progression with “Dross,” “Trance of Annihilation,” “Feral Heart,” “Solitude,” and “Sylvan Apotheosis” – are all as aptly titled, evoking the essence of losing your grimy soul and mind into the wilderness of forest which has long been an enduring part of Black Metal aesthetics on metaphorical and conscious level.  Forest is a place of seclusion and like all the calmness and uncertainty it beholds Eosphoros created music which is uncompromising and raw yet melodic, misanthropic and ferocious like all forces created by Mother Nature.

While discussing about the inspiration behind their progression to Eosphoros,  JG (Vocal and Guitar) and AD (Bass) expressed in one their interview that – “Of the music that directly inspires us the classic records like “Nattens Madrigal”, “Transilvanian Hunger”, and “Høstmørke” also many other contemporary stuff as well: Panphage, Arckanum, Runespell, Wulkanaz and most of the Kuunpalvelus. I’m really drawn to the raw but melodic style that comes out of Finland (i.e. the first Goatmoon record, and anything that sounds like it)” and “In addition to the above mentioned, I am also a giant nostalgic and listen to stuff from yesteryear more and more. A lot of my favorites are in the catalogues of Head Not Found, early Moribund, Tesco, and Old Europa. Temple Nightside covering Arcana sums up my influences best”.

Diving into a deep discussion about the lyrical view, JG bring forth it’s obvious relationship between Gnosticism and pantheism; how the anti-materialist worldview of the Gnostic can be reconciled with the pantheist’s deification of existence itself.

However, contemplating and channeling such profound life views in a debut release certainly poses a challenge while identifying and setting up the tone of overall production; as construction and method of its capture is something that can limit or destroy the possibility of otherwise great album. Big budget, hi-fi black metal sounds for the sake of promotion and pleasing masses never ever do justice to the honest representation of the musician’s effort and imagination. True to their manifestation to confine the sound they envisioned, this record is self-recorded and produced in their Sacred Atavism studio and wholeheartedly channeled the right level of filth and grime which in process diverted the personal focus from the instrument to the song specific thus made the release as expressive and natural it could be sounded.

The cover art of “Eosphoros” is visualized by Nightjar/Adam Burke; which is evocative and its abstract representation of sonical intrusion into the forces of nature truly encapsulate the spirit this record beholds. Although it’s just the beginning, however Eosphoros announced their presence with a minimalistic yet sophisticated endeavor in their self-titled album which will certainly reach the spirited souls. (Rocky)