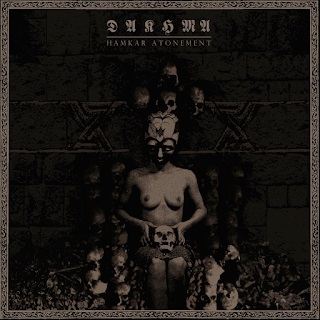 4 Years ago the “Tower of silence” or Dakhma was erected in Switzerland. After 1 demo, 2 splits and 1 EP, they offer us their first full length released through Iron Bonehead Productions. Beforehand: this is a monstrous release, clocking in at 70 minutes with a mixture of Black/Death with a ritualistic approach, which means repetitive and trance inducing riffing as well as chants done in a way that it will bring fresh air into the genre. After some chanting at the beginning of the album the band changes into a morphing being that varies speeds and moods perfectly. The guitars and bass are tuned deep, like Irkallian Oracle from Sweden. The drums are really organic and alternate between furious blasting, tribal tom work and some different slower beat variations. The vocals have a huge range from Abigor like shrieks to low guttural vocals, and as mentioned already some chanting which has a lot of expression. The band reminds me of an amalgam between Irkallian Oracle, Diocletian, Pseudogod, Cultes des Ghoules and some other more exotic artists. You better check it out for yourself. Each instrument has its own important piece during the album. Killer Black/Death Metal which is well produced, dark and crushing yet remarkable without losing power, variation or catchiness. Zoroastrian ritualistic Black Metal of Death. Be prepared…The ritual is about to begin. (DPF)